"Pride and Prejudice and Zombies" Author Sued by Publisher 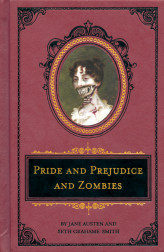 Pride and Prejudice and Zombies author Seth Grahame-Smith is being sued by his publisher for delivering a manuscript that Hachette claims is “an appropriation of a 120-year-old public-domain work”.

Grahame-Smith, who unleashed the zombie mashup on the world with the surprise 2009 hit Pride and Prejudice and Zombies, and went on to write the bestseller Abraham Lincoln: Vampire Hunter, is being taken to court by Hachette for breach of contract. The complaint, which was posted online by Publishers Marketplace, says that the author and publisher made a $4m (£3m) deal in 2010 for Grahame-Smith to deliver two new works, with an initial instalment of $1m paid to the author.

How to Make Your Books Stand Out With ISNI

How to Sell Books That Are Good Enough to Steal