As one of the smallest but also one of the more successful independent houses operating in New York City today, Soho Press has been publishing award-winning literary fiction from its Manhattan headquarters for some 30 years. The publisher's international crime imprint, meanwhile, for which Soho Press is perhaps best known, is currently celebrating its 25th anniversary.

Given the sort of literary prestige and prominence Soho Press has enjoyed for so long, it should probably go without saying that the house's skill at finding unusually talented writers sits at the core of its success. In 2015 alone, for instance, Soho had two New York Times Best Crime Novels, one Washington Post Notable Fiction book, an NPR Best Book, a Los Angeles Times Best Book, a Boston Globe Best Book, a Seattle Times Best Book, and a Milwaukee Journal-Sentinel Best Book.

Yet Soho Press' accolades only tell half the story; the company is also well known for its creative marketing and promotional efforts. Aside from selling books directly to readers from its website, for instance, and creating remarkably successful subscription-style book clubs, Soho has experimented with sweepstakes giveaways, innovative branding initiatives, and interactive online features. The company's latest marketing effort, a program known as Passport to Crime, involves down-pricing many of the first books in the publisher's existing crime series. "We price them at $9.99 as a way to get readers to take a chance on a new series," says publisher Bronwen Hruska. "It’s been hugely successful."

Hruska recently spoke with Book Business about the changes she's instituted at Soho Press since taking over as publisher in 2010: The litmus test she uses to decide whether a manuscript is Soho-worthy, for instance, and the promotional techniques her sizable marketing team uses to ensure its books earn the attention they deserve in an increasingly noisy marketplace.

Despite Soho Press' relatively small size, you seem to be consistently turning out bestsellers and award winners. Do you feel you're doing anything particularly different than what your competition is doing?
Well, we publish about 50 titles a year in the original hardcover, and so with paperbacks, we do about 80 or 90 books a year. And because we don't publish hundreds of books a month, we're really able to pick the books we love and the authors we really believe in. We're able to give them a ton of attention. That allows us to start building the buzz for a new book really early and put those books in front of the people who need to know about them and who are going to start talking about them. I know that's the point of publishing; that's what you're supposed to do. But I think it's much easier to focus in when you have fewer titles, and only books that we think are of the highest quality.

I don't ever feel like, "Oh, I have to publish that book because I have a slot here and I've got to fill it." Or, "Well, I think this is going to make a lot of money, so I've got to publish it." I never have that feeling. I always feel like if I miss my stop on the subway because the story I'm reading is so good, then that's a book I want to publish.

Soho Press has a fairly large marketing division, relative to the size of your staff. Why is that division so large?
That was one of the biggest changes I made when I started running the company in 2010. When I came on, Soho was just four people, and then I made five. There were a couple of publicists and a sales and marketing person, and that was it. And so we had a company with this incredible reputation and all this credibility, but we realized that you can't just make these great books and expect that people will constantly go and find them. So one of the first things I did was to expand the marketing department, and it paid off very well. Finding the right people with the right chemistry, especially for an office of this size, I think is very important. And that takes time, and trial and error. But I feel like we have an incredibly smart and motivated group of people working here who just love books and love what they do. And so the chemistry in the group is a really big part of whatever our special sauce is.

Soho has a subscription-style book club for its crime imprints and is selling books direct to consumers on the website. How do these initiatives work and have they proven successful?
It's been great, actually. The idea behind the International Crime Club is that people can get a new hardcover book every month for $17.99 per month [or a new ebook for $9.99 per month], plus some fun extras: a tote bag or a coupon for 30% off an entire series. Sometimes you'll just get a paperback from another series in your monthly package as a bonus. It's a way for people to discover new authors they might like.

We started to sell books through our website a little over two years ago. But we really ramped it up this past year. We did most of our subscription advertising around holidays, [and] we did special promotions linked to big books or events. In 2015 we had a more constant approach to advertising, spending more money year-round. We were trying to figure out what worked and what didn't.

We also promote our Crime Club via social media. Juliet Grames is our crime editor and associate publisher, and she does a crime newsletter every month or two. So we reach out through our various newsletters to people who we know are interested in this kind of book, or that kind of book. We advertise in digital ads, and some social media ads. We're always trying to find the readers who are going to be interested in what we're doing.

Has it proved financially fruitful to sell books direct to customers that way?
Yeah, especially through the subscriptions. That's been really exciting, seeing that grow. The subscriptions grew 100% over the last 12 months, as people have discovered it. In terms of sales on the website, we had a 42% increase in direct sales year over year for 2015.

You also have a few other interactive features on your website that are meant to help facilitate discovery, right?
Right, the website was a long work in progress. We had a very static website from the old Soho days that just wasn't very interesting; you couldn't do anything on it. But it's pretty great right now. We have an interactive map of the world that shows every place where we have a mystery set. You can click on it and see which series takes place where, and what the books in the series are. It's pretty fun. 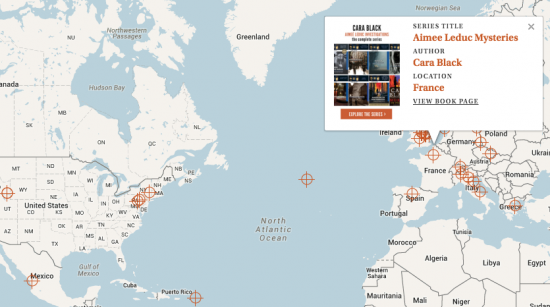 The idea is that people who love Soho International Crime books mostly love the armchair traveler aspect. You get a great story and a crime is solved, but you're also deeply immersed in a different culture. If you love Paris, for instance, you're going to want to read every Cara Black book that comes out, but you're probably going to love a lot of the other books we do in that imprint. So we can go in there and see what else we have that might be interesting to those readers. It's very hard to do that, even on Amazon or at a bookstore. It's a great collection, and it's organized in a really visually appealing way.

Do you have any programs you plan on implementing in the upcoming year?
Gosh, we're talking about stuff all the time! Something that I'm really excited about is we're doing a huge summer of Soho Crime, starting in June to commemorate the 25th year of our crime imprint. We're putting a ton of resources behind it. We're going to have a presence at national chains, and we're doing a big push with indie bookstores to have lots and lots of Soho books on the tables. We've been going back through the series that are still active that we want to keep active, and repackaging a lot of them.

I don't know if you know about our Soho Crime spine, but every author has a different color, and there's a very uniform look. It's a pretty strong branding thing. I can go into a bookstore and go to the mystery department, and in two seconds know exactly which authors that stores has, and how many of their books are there. We've actually done a poster that shows what the Soho Crime color library looks like with all the different spines lined up. So all the books with the newly repacked spines will be on display this summer. And when the summer promotion is happening, we're going to have our authors reviewing each others' books all over social media, just to spread the word. So hopefully, God willing -- I'm knocking on wood -- you'll be hearing a lot about Soho Crime this summer.

Do you have a specific method for fostering these book marketing ideas? Any managerial tricks you'd like to share?
I think the way I designed the office to be set up helps with that. The middle part of the office connects the editorial side and the marketing side, and there's a couch and a big table, and all the books in our library are behind that. And we have formal meetings there, but we also just sit down there and start talking, every day.

I'll give you an example of an idea that came out of one of those talks about two years ago, when we were just sitting at the table: We decided to do something really special for Cara Black. People love her and they love her books, so we did a kind of sweepstakes. There was a perforated ticket that we had inserted into one of her books -- it was a beautiful hardcover book -- and you could tear it out and could send it in to win a trip to Paris with Cara Black. There was a library component and a bookstore component. We had posters and tabletop displays and everything. We had thousands and thousands of entries. The first time we did it, Cara actually went to the warehouse in Westminster and signed 15,000 books. It was an incredible feat.

Wow. How long did that take?
A few days. There was a cramped up hand, and she bled on a few of the pages. It was very dramatic. But you know, it was a really powerful statement, to put all that behind Cara. It's fun, it's really effective, and it takes an author from having a nice presence in the world and a lot of fans to another level. And Cara is a lovely person, so, going to Paris with Cara Black? I mean, how could that be anything but wonderful?

Dan Eldridge is a journalist and guidebook author based in Philadelphia's historic Old City district, where he and his partner own and operate Kaya Aerial Yoga, the city's only aerial yoga studio. A longtime cultural reporter, Eldridge also writes about small business and entrepreneurship, travel, and the publishing industry. Follow him on Twitter at @YoungPioneers.