NEW YORK—February 8, 2016—Discover Sci-Fi (http://www.discoverscifi.com) today launched a new hybrid publishing venture that is a collaboration among ten of the world’s top-selling science fiction authors, who have appeared on the USA Today and Amazon Best Sellers List.

Discover Sci-Fi’s authors have collectively sold five million copies of their books to date, and will sell an estimated three million copies in 2016. A number of their titles have been optioned for film and television, and have been translated into as many as sixteen foreign languages. Many of Discover Sci-Fi’s authors both publish independently and have concurrent contracts with traditional publishers. 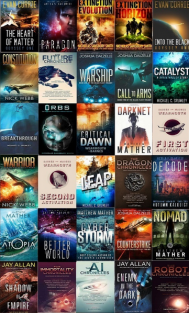 “Nearly ten thousand fans have already flocked to join our new platform in just the first few days,” says Matthew Mather, one of the co-founders of Discover Sci-Fi. “With experience in both independent and traditional publishing, we’re in a unique position to forge a direct connection with readers.”

Disappearing shelf space is a major issue in the publishing industry, and introducing readers to new books and authors is increasingly difficult in this fast-changing market. Discover Sci-Fi aims to address this problem by connecting readers directly with authors. Its initial offerings include a reader-focused newsletter and insider articles for fans of the genre.

Additional information on the Discover Sci-Fi $100,000 Paperback and Ebook Giveaway are available on the website -- http://www.discoverscifi.com/go

About Discover Sci-Fi
Discover Sci-Fi is a joint publishing venture among ten of the world’s top-selling science fiction authors, with a goal of forging a direct connection between readers and authors in the genre.