Wiley, a global provider of knowledge and learning solutions that improve outcomes in research, professional practice, and education, announced the following results for the fourth quarter and twelve months of fiscal year 2016: 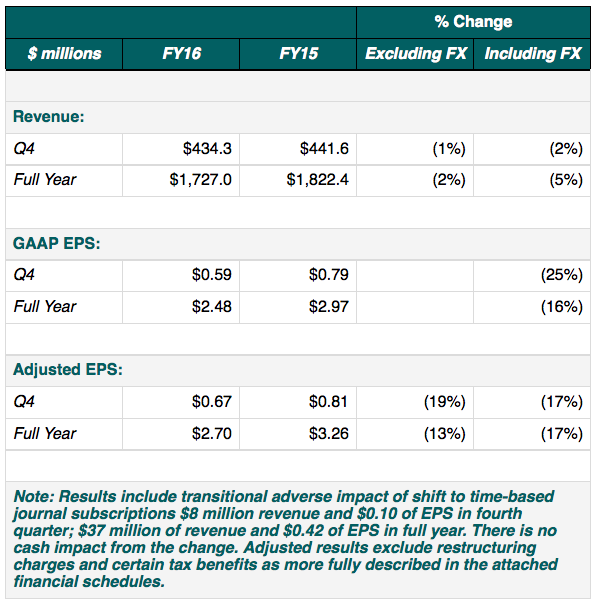 “Our fourth quarter results capped the fiscal year in line with our guidance for revenue and earnings,” said Mark Allin, President and CEO.  “We continued to make good progress in our transition to a digital knowledge and learning company, with nearly two-thirds of our revenue now generated from digital products and services.  Our solutions businesses again delivered double-digit top line growth, notably online test preparation, corporate learning, and online program management, offsetting much of the market-driven revenue decline in traditional book publishing.  Finally, our journals business achieved marginal revenue growth for the year, driven by steady subscription results and double digit growth in author-funded access.”

Operationally, Wiley’s fiscal year 2017 outlook is for revenue to be flat and adjusted EPS to be down by mid single-digits excluding bothforeign exchange and the favorable impact from shifting to time-based journal subscription agreements (+$37 million in revenue and +$0.42 in EPS).  The revenue projection anticipates continued modest growth in Journals and double-digit growth in Solutions to be largely offset by further declines in Book publishing. The Adjusted EPS projection reflects marginally lower operating income due to the continued book decline and investment in Solutions growth, as well as higher taxes and an anticipated rate hike impact on interest expense.

Wiley generates half of its revenue from outside the United States, and is therefore exposed to foreign exchange rate fluctuations, particularly in relation to the euro and pound sterling.  For fiscal year 2015, the weighted average rates for sterling and the euro were 1.60 and 1.25, respectively, on a US dollar equivalent basis.  The weighted average rates for fiscal 2016 were 1.50 and 1.11, respectively.  Note that foreign exchange was adverse to full year revenue and EPS by $61 million and $0.13, respectively. Throughout this report, references are made to variances “excluding foreign exchange” or “on a constant currency basis”; such amounts exclude both currency translation effects and transactional gains and losses.

The Company provides financial measures referred to as “adjusted” contribution to profit and EPS, which exclude restructuring charges and certain tax benefits.   Variances to adjusted contribution to profit and EPS are on a constant currency basis unless otherwise noted.  Management believes the exclusion of such items provides additional information to facilitate the analysis of results.  These non-GAAP measures are not intended to replace the financial results reported in accordance with GAAP.

Wiley is a global provider of knowledge and knowledge-enabled services that improve outcomes in areas of research, professional practice, and education.  Through the Research segment, the Company provides digital and print scientific, technical, medical, and scholarly journals, reference works, books, database services, and advertising. The Professional Development segment provides digital and print books, online assessment and training services, and test preparation and certification.   In Education, Wiley provides education solutions including online program management services for higher education institutions and course management tools for instructors and students, as well as digital and print content.