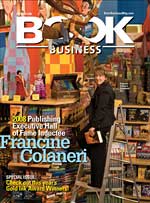 An important characteristic of digital content is its ability to deliver to multiple platforms simultaneously—to print, Web and mobile channels. Invariably, the same content will look different when viewed on various output devices, and it should. Each device has its own display characteristics, and the design of the presentation should be optimized for that device. I can hear the groans from publishers already. Reach for the ibuprofen now, because it gets worse: Content also varies within the same delivery medium. For example, content may be syndicated on the Web to multiple delivery partners, whose respective delivery models require alterations to the design. Even large-print

76,000 The number of copies of “Sarah: How a Hockey Mom Turned Alaska’s Political Establishment Upside Down,” by Kaylene Johnson—the only biography of Alaska Gov. Sarah Palin—regional publisher Epicenter Press printed in a few days, due to an overwhelming, nationwide demand in the week following the announcement of her Republican vice-presidential nomination. That same week, Zondervan announced that it would release a biography of Palin in October entitled “Sarah Palin: A New Kind of Leader.” Source: Book Business Extra, Sept. 12, 2008 10,000 Number of copies Barnes & Noble (B&N) originally ordered of Robert Kuttner’s “Obama’s Challenge: America’s Economic Crisis and the Power of

Imagine being able to tell your grandkids that you worked on the Beatles’ “Sgt. Pepper” album, or on “Star Wars”—playing an important role in the creation of a cultural phenomenon that anyone would be proud to claim as the capstone of their career. Francine Colaneri, the book industry’s 2008 Publishing Executive Hall of Fame inductee, is just that lucky. As vice president of manufacturing and supply chain at global children’s education and media company Scholastic Inc. (New York), she was instrumental in coordinating the manufacture and distribution of all seven books in the “Harry Potter” series published in the United States. “We

As Steve Potash, CEO of Overdrive and president of the International Digital Publishing Forum (IDPF), said last spring at IDPF’s annual meeting: The world of digital books is expanding, and there is a steady flow of major publishers and technology providers adopting the .epub standard. What we’re going through now is a ramping-up stage during which it can’t be either/or—nobody is saying that we will accept or deliver only in .epub. Accepting only .epub formats is likely to be the first move that’s made, because the advantage to publishers is that they will have only one electronic book version with one ISBN of which

Now in its 21st year, the Gold Ink Awards call attention to the print industry’s finest projects. 2008 was no exception, as North American Publishing Co. (NAPCO; parent company of both the Gold Ink Awards and Book Business) received more than 1,400 entries for this year’s competition. As always, a talented team of judges hailing from diverse backgrounds across the industry poured through the submissions, awarding Gold, Silver, Bronze and Pewter honors in 46 categories. In all, 488 entries were selected for awards. Nearly two-dozen judges sorted and sifted through the finest print pieces, submitted by publishers and printers alike, over the course of

Insights at a Glance

What is your best management tactic? “People are the key to success. Build a team with diverse strengths, whose members are committed, goal-oriented and embrace change.” What is key to building collaboration among departments and vendor partners? “Recognizing the value of co-workers and business partners, being open-minded and willing to compromise, and always being fair.” What’s the best cost-saving tactic you (or Scholastic) has implemented? “One I’m most proud of is developing a lower basis-weight paper for one of our major book formats. It was truly a collaborative effort on the part of the mill, printer and Scholastic.” What keeps you up at night?

Francine Colaneri, this year’s inductee in book publishing, joins the following inductees in magazine publishing into the 2008 Publishing Executive Hall of Fame. Bob Wiemers, operations director, Boy Scouts of America Rich Zweiback, executive director of manufacturing, Lebhar-Friedman Inc. They will be recognized for their significant achievements at the Gold Ink Awards/Hall of Fame Banquet at McCormick Place in Chicago on Monday, Oct. 27, during Graph Expo.

Steve Gillis and Dan Wickett are proving that the independent press is alive and well. In 2006, the co-publishers—Gillis, an author who made good in the stock market, and Wickett, a blogger who founded the Emerging Writers Network (EmergingWriters.typepad.com)—founded Dzanc Books with the goal to champion great writing. Now, with two years of business under their belts, the nonprofit press continues to garner attention for its crusade to help put good books into readers’ hands. • What are the biggest challenges facing smaller, independent publishing houses? Steve Gillis: Right at the top of the list is being well-financed. There’s a lot

“Nothing can stop the man with the right mental attitude from achieving his goal; nothing on earth can help the man with the wrong mental attitude.” —Thomas Jefferson It’s not difficult to get a bit down about publishing lately. Manufacturing and distribution costs have skyrocketed (squeezing already tight profit margins), staffs must do more with less, there is less and less shelf space at bookstores to sell your books, digital publishing brings opportunity, but also risk as we venture into new territory, and today’s economy doesn’t help. But this issue of Book Business shows a silver lining. It points out stellar achievements

Children are pulled in many directions today; at least, their attention is. They are occupied by MP3 players, gaming systems, computers, cell phones, handheld electronic games and other digital technologies. And yes, children still play old-fashioned board games. They also attend school, compete in team sports, and participate in community and extracurricular activities. With all of these outlets occupying children’s time, how are books faring? With an estimated 40,000 to 60,000 new children’s titles released each year, children’s book publishers are concerned with how their books can compete for young readers’ attention with the thousands of titles already in the market, according to Ron