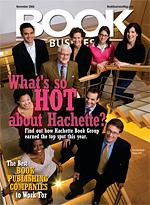 299,112 Number of people who attended the 2008 Frankfurt Book Fair, a 5.6-percent increase from last year. The attendance number also set a record since the fair moved to five days from six in 2004.

How the Best Companies Were Selected

The "Best Book Publishing Companies to Work For" is a project conducted by Book Business in conjunction with the Best Companies Group, an independent research firm that specializes in finding and recognizing great places to work. The study was free and open to all public and privately held organizations, either for-profit or nonprofit. To be eligible, companies had to be book publishing companies that have been in business for at least one year and are based in the United States, with a minimum of 15 employees.

It's All in the Packaging

Durham, N.C.-based Duke University Press (DUP) is hoping to reverse the trend of declining hardcover-book sales to libraries by offering those libraries its full list—approximately 100 new scholarly titles per year and a backlist of over 900 titles—electronically on Ebrary (ebrary.com). By purchasing through Ebrary a subscription to DUP's list, called the e-Duke Books Scholarly Collection, an unlimited number of simultaneous users at the subscribing library can access the content and utilize Ebrary's searching, navigating, archiving and other research tools.

Of Androids and E-books

Google's open-source Android mobile operating system, a device manufactured by HTC of Taiwan to operate on the T-Mobile network, didn't make much of a splash. The press was unabashedly nonplussed. Out of the gate, the launch of the first Android phone, called the T-Mobile G1 with Google, failed on at least one count: matching the appeal of the iPhone.

The Best Book Publishing Companies to Work For

The "Best Book Publishing Companies to Work For" list is Book Business' annual ranking of companies that seem to embody the philosophy that a company's employees are the key to its success. But being a great company isn't just about offering a great benefits package (though that certainly helps). The companies that made the list this year create environments where employees are valued and respected professionally, but they also work to help enhance employees' personal lives. Whether it's through back-up childcare services, fitness centers, sabbatical programs or super-flex flex time, these companies go the extra mile to keep their employees happy—and it shows.

What's So Hot About Hachette?

"I think publishing is the greatest team sport invented," says David Young, chairman and CEO of Hachette Book Group (HBG). "We work hard to have fun and celebrate success, and deal with problems as a team. That's what we try [to] foster here."

Teamwork: To Young and others at Hachette, it's much more than just a vague notion. It's a guiding philosophy, a strategy cultivated during difficult, transitional times, and one that has helped the company grow. It's also one of the main reasons Hachette has been selected as this year's "Best Book Publishing Company to Work For."

Why do They Love Going to Work?

Average number of years the highest-ranking official has been in office: 15.7 89% offer performance bonus or incentive programs to all employees 70% offer telecommuting options 70% offer the option to work compressed work weeks 70% provide an Employee Assistance Program, which offers counseling to employees on a range of issues, such as stress management, family or parenting issues, smoking cessation, elder-care issues, financial management, etc. 70% have on-site facilities that promote exercise and fitness 60% offer on-site fitness/wellness programs 40% pay all or part of employees' costs for health-club memberships or fitness/wellness programs 80% provide cafeteria or meal subsidies, free daily snacks or beverages (a few even provide free cafeteria meals) 50% provide adoption assistance, usually in the form of reimbursement for adoption-related expenses, up to $2,500-$5,000 80% provide domestic partner benefits 90% offer tuition reimbursement (a couple pay 100%)But it isn't all about benefits.