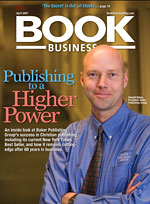 ‘The Secret’ is Out (of Stock)

The secret to publishing a runaway best seller is out, and you won’t need to read a book or watch a DVD to get in on it. “The Secret,” a self-help book by Rhonda Byrne, is perhaps the most controversial chart-topper since Dan Brown’s “The Da Vinci Code.” By now you’ve probably heard its premise—that your own thoughts hold the key to a happy, healthy and successful life. Positive thinking attracts positive results, preaches Byrne and a team of “teachers” featured throughout the book. They call it the law of attraction. Your business didn’t fail because you missed a quota or hired the

A New Home For Independent Publishers

Many independent U.S. book publishers breathed a sigh of relief after a Delaware bankruptcy court ruled in favor of the Perseus Books Group taking control of the distribution contracts for more than 120 clients of the now-defunct Publishers Group West (PGW). The New York-based Perseus Books offered to pay 70 cents for every dollar of pre-bankruptcy claims owed to publishers who were distributed under PGW, a Berkeley, Calif.-based division of Advanced Marketing Services (AMS). The bid to help bail out AMS from a pile of debt claims was approved by Judge Christopher Sontchi Feb. 19. Perseus President David Steinberger says the company began

An Exhibition of Optimism

In the months following the Sept. 11 attacks, museum admissions declined sharply, exhibitions were cancelled, and in the turbulence, administrators began examining whether they could continue to publish books as a result. Today, “there is generally a very optimistic feeling, which is not to say it’s easy. It’s still very difficult, but it’s an exciting time, and I feel really good about our future,” says Yale University Press Publisher Patricia Fidler. “No one was saying that a few years ago.” Currently, her art and architecture division publishes 120 books annually, of which roughly 60 percent stem from Yale’s museum partners. Stephanie Medlock,

Bringing Life to Your Backlist

Springer Science + Business Media does not view Google Book Search as a detriment to its business, but rather as a valuable marketing tool for its popular science, technology and medical (STM) titles. Paul Manning, vice president of book publishing for Springer, attributes much of the recent growth of the company’s back catalog of older titles to its participation with the controversial program. With more than 30,000 titles available in Google Book Search, the publisher saw more than 1 million views in a one-month period, and 20 percent of its “buy this book” clicks on the search were for titles older than 10 years

We’re just back from the 2007 Book Business Conference and Expo and planning for next year’s event. If you missed this year’s conference, check out some of the highlights on pages 10-14. It was humbling to be a part of this gathering of brilliant publishing minds, both speakers and attendees. But with this year’s conference frenzy winding down, we head into another busy and exciting time of year, with our Gold Ink Awards competition. If you’re not too familiar with the Gold Ink Awards, it’s the nation’s most prestigious print competition, founded 20 years ago, to recognize the finest in print production. We receive

More than 1,000 publishing industry professionals converged on New York’s Marriott Marquis, March 5-7, braving a windy Times Square to attend the 2007 Book Business Conference and Expo. The future of print was a primary theme throughout both the exhibit hall, which housed approximately 100 industry suppliers and services, and the conference program, which was packed with more than two dozen sessions, roundtables and panel discussions relevant to book publishers looking for tools to manage their businesses in an ever-changing industry. “The conference hit on so many of the most significant issues facing book publishers that attendees and speakers alike were truly energized by

Many publishing management solutions are available in today’s competitive marketplace that can help publishers automate and link business functions such as sales commissions, royalties, title management, fulfillment, invoicing, marketing, production management and more. As with choosing any solution, it is important to do extensive research on both the product and the company behind it. Ideally, you should be looking for a solution that won’t need to be updated every year, that can expand as your company evolves, and that will support your customer-centered business. “A solution must not only meet your needs today, but it must meet your needs five years from now. The

Publishing to a Higher Power

Dwight Baker, president of Grand Rapids, Mich.-based Baker Publishing Group—the third-largest publisher in the Evangelical Christian publishing market—arrived in his position from a different starting point than most publishing company presidents, and he’s using that fresh perspective to put his own personal spin on religious publishing. His approach seems to be working. The company’s annual sales in 2006 surpassed $50 million, four of its publishing divisions saw double-digit growth, and it has a current New York Times Best Seller on the market with 1.4 million copies sold. The family business was founded in 1939 by Dwight’s grandfather, Herman Baker. When Dwight was a teenager, he

Random House Inc. and Lantern Books were recognized for their achievements in environmental sustainability, taking home the first-ever SustainPrint.com Leadership Awards in book publishing. The awards were presented Mon., March 5, during a special reception at the Book Business Conference and Expo, held at the New York Marriott Marquis, Times Square. The SustainPrint.com Leadership Awards recognize book and magazine publishing companies for their achievements in environmental sustainability. Fast Company magazine and the National Wildlife Federation were recognized as magazine publishing leaders. The awards are presented by SustainPrint.com—a Web site developed by Book Business and Publishing Executive magazines to provide a central location for

In Part I of this series, I described how supply chain thinking can be applied to business and career decisions. Correctly identifying your “value proposition” is the key to being able to diagram where in the chain of buying and selling relationships you can be most effective. Building on your core competencies, and recognizing that you need to manage your supply chain relationships becomes the business proposition. Chances are that when you first examine your supply chain, you will find that you have been a slave to it, rather than a master of it. I also noted that by rethinking and realistically recasting your

The Value of Partnerships

Make friends everywhere you can. Sure, it’s simple advice your mother probably gave you, but this and other pointers given during an hour-long look into the world of book publishing partnerships at the Book Business Conference and Expo helped shine a light on the increasing importance of collaboration throughout the industry. Merriam-Webster President and Publisher John Morse took the reigns of the afternoon session that included Tad Crawford, Allworth Press’ president and publisher, and David Borgenicht, president and publisher of Quirk Books. The panel launched into a step-by-step breakdown or how to care for and feed partnerships. From working with cell phone companies to