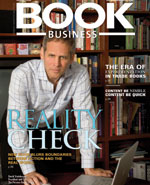 9 Considerations for Your Next CD/DVD Companion Project

Some production managers have estimated that a unit cost of a DVD might run an average of about 60 cents, a CD 26 cents, and a sleeve about 23 cents, obviously with unit costs going up for small print runs and dropping for extremely large print runs. But those savvy in CD/DVD production stress that there are many factors that can cause unit costs to vary significantly. Here are nine considerations to keep in mind as you begin work on your next CD/DVD companion project to help ensure you don’t get burned with unexpected costs or complications: 1. What features will you require the CD

An Issue for the History Books

The president of a publishing company recently said to me: “It’s a terrifying and exhilarating time in publishing.” That just about sums it up. In this issue alone, the changes we’re covering are quite astounding: A Running Press book that could be the newest craze, blurring reality and fiction, with reader interaction pushed to a new high—and, oh yes, featuring product placement (see “Reality Check” page 20); and mobile content and ad-driven publishing models (see “The Era of Experimentation,” page 28). Innovation and creativity seem to be the name of the game, in all forms of media, in fact. Look at the ABC Network’s

Patti Ward is the director of product management for Wolters Kluwer Health, a $900 million division of international publisher Wolters Kluwer. She joined the company in 1996 as a production assistant, but new responsibilities found her re-engineering business processes for the past five years. “We were no longer responsible for putting ink on paper, and paper in the mail. As the industry demands have shifted, so have our production technologies,” Ward explains. As has been the case with most publishers, the impact of digital media has been profound for Wolters Kluwer Health (www.WKHealth.com), which serves professionals and students in medicine, nursing, allied health,

Chuck Nason admits he wasn’t fully prepared for the effects of global competition as it accelerated in 2001. The president and CEO of Worzalla Publishing, a Stevens Point, Wis.-based book manufacturer, watched as a significant portion of the company’s four-color children’s book work went to China. “Global competition has affected us in a major way,” Nason contends. “It caused us to suffer a five-year slide in annual sales from just over $62 million to $44.4 million a year ago. This has meant little or no wage increases for our employees and a freeze on capital equipment purchases for four years.” Nason points out what

18,000 Based on preliminary figures from U.S. publishers, Bowker is projecting that U.S. title output in 2005 decreased by more than 18,000 to 172,000 new titles and editions. This is the first decline in U.S. title output since 1999, and only the 10th downturn recorded in the last 50 years. According to Bowker projections, however, 2004 numbers were a tough act to follow—it had the highest total of new titles and editions ever, and reflected an increase of 19,000 new books over 2003. Bowker, May 2006 No. 1 Great Britain, long the world’s per capita leader in the publication of new

I Can See for Miles

A year ago, Ideals Publications (www.IdealsPublications.com)—a Nashville, Tenn.-based division of Guideposts that publishes 100+ titles annually for children and adults—was operating, as many publishers do, under a paper-based inventory management and distribution system that involved order-faxing and a returns-handling system that could sometimes take weeks. Last July, however, Ideals began working with a new distribution company that had a new warehouse management system in place, called IRMS, to automate inventory management and returns processing. Today, Ideals’ order- and returns-management process is paperless, and its inventory levels are more accurate and visible to them in real-time. Returns are in the door and back in active

In Search of a Publisher-Friendly Book Search

The most-used computer operating system in the world is revving up to take on the world’s most-used search engine for the right to claim title to the world’s most-used online book search. Microsoft’s game plan is to overtake Google in the book search field—by involving publishers instead of alienating them. The forthcoming release of Microsoft’s Windows Live Book Search—a search program that is scheduled for release later this year—comes on the heels of the controversy surrounding the introduction of Google Book Search, Google’s foray into book search. Google has taken a pounding since it presented its search in October 2004. Several law

Despite the predictions of gray skies that have become increasingly prevalent in forecasts for the book publishing industry, a recent survey conducted by Book Business shows that the large majority of industry executives still cast an optimistic eye toward the future. In addition, most respondents foresee a lucrative long-term future for their companies and appear unconcerned that digital-format books will eventually replace print. Sixty-eight percent of those surveyed replied they feel “optimistic” about the industry’s future and another 10 percent are “very optimistic.” Just 16 percent consider themselves to be “pessimistic.” Furthermore, these executives appear to, for the most part, have high hopes

Somewhere between the ages of five and 11, kids stop reading. Well, maybe not all of them, but a recent study spearheaded by Scholastic Inc. shows that readership drops off as children age. The results show that 40 percent of kids between the ages of five and eight read for fun every day. Only 29 percent of nine- to 11-year-olds read as frequently, and that number declines sharply through age 17. Running Press Book Publishers thinks it knows why—and how to reverse this troublesome trend. Running Press, a Philadelphia-based imprint of The Perseus Books Group, will release a new young adult (YA) title, “Cathy’s

The Era of Experimentation

The adult trade business has had to endure many changes in recent years. E-books are seen as a business model alternative, but while they’ve been convenient for consumers, the adult trade revenues aren’t exactly astounding. Sure, mobile content could be a savior of the future, but right now it’s an experiment of the present. With all of that in mind, we look at the present of adult trade. No Denying Technology Brian Murray, group president of HarperCollins, says digital opportunities are growing, and the adult trade market is going to be dependent on how it’s able to grab the Web-browsing consumer. “The bookstore

The Information Superhighway to Heaven

“It’s quite a different world for Christian publishers than it was even just a few years ago,” Barbour Publishing President and CEO Tim Martins says. Uhrichsville, Ohio-based Barbour began in 1981 as a small remainder-seller of other publishers’ excess stock, known as Book Bargains, and evolved into a publisher that has shipped more than 100 million books in its 25 years in business. Now, it’s developing supplemental methods of getting its inspirational books to an ever-growing readership by leading the faithful online. One of the biggest challenges Barbour and other Christian publishers are facing is the consolidation of the sales channels—the big-box mentality

The Prescription for a Healthy Marketing Campaign

Noreen Henson’s career path took a stop at Demos Medical Publishing three years ago after stints in television ad sales and with a few ad agencies. Demos has an extensive and successful line of references in neurology and rehabilitation medicine and is now expanding into the spine medicine and oncology professional markets. Its sales, Henson says, continue to increase steadily, and the New York City-based company—now in its 20th year—is finding new and improved channels to market its products. Henson, Demos’ marketing manager, talked with Book Business about the challenges and changes she has endured during her time in medical publishing, as well as