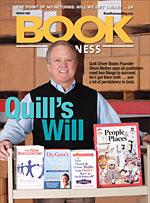 The Harry Potter Lexicon (HP-Lexicon.org) was started by librarian and “Harry Potter” enthusiast Steve Vander Ark as an online index of everything you ever wanted to know about the famous boy wizard and his imaginary, magical world, as told in the mega-selling “Harry Potter” book series.

The preliminary settlement agreement between the Association of American Publishers, the Authors Guild and Google regarding Google’s Book Search project and its alleged copyright violation has been heralded by the parties involved as a victory. Other publishers and industry analysts also have voiced optimism over the settlement’s impact on the industry. But as the date of the final settlement review (the Fairness Hearing) approaches (June 11), many still are investigating the agreement’s details. Others have voiced concern and suggest the settlement demands some significant changes.

Six Approximate number of titles HarperCollins expects to produce as video books, or v-books, which will be available for download on iPods and iPhones. The publisher released its first v-book, “What Would Google Do?” by Jeff Jarvis, last month; the print version of the title was released in January. The “Google” v-book, which retails for $9.99, features a 23-minute video of Jarvis discussing the basic concepts in the book.
Source: paidContent.org, Feb. 3, 2009

People fear the unknown. It’s a simple premise that creeps into our lives more than we realize. Change brings a great amount of uncertainty … and therefore, fear. The changes happening in the book publishing industry right now are enough to prompt even the bravest publishing souls to cover their eyes, cautiously peeking through the space between their fingers to see if it’s OK to look.

Steve Mettee picks up ideas from the world around him. Traveling, reading the paper, browsing in a bookstore—he’s the type to notice what’s there and what’s missing, and think about how the publishing company he founded, Quill Driver Books, can meet needs and fill in gaps. And once he’s latched on to an idea, he’s loathe to let it go.

It has been several months since Google’s preliminary out-of-court settlement with the Association of American Publishers (AAP) and the Authors Guild regarding Google Book Search, and the dust has yet to settle. The agreement’s true impact will only become apparent over time, as its terms are put into practice. The devil will be in the details of execution. This is a watershed event nonetheless and marks the beginning of a new era in content distribution. A few themes have emerged that will characterize this next phase.

The Point of No Returns

On his “Publishing 2020” blog, Joe Wikert, general manager of O’Reilly Media’s Technology Exchange Division, mused recently about the long-term viability of the closely watched deal between Borders and HarperStudio, whereby the bookstore chain will purchase HarperStudio titles at a 10-percent to 15-percent discount in exchange for accepting a no-returns agreement. As a result, Wikert wrote, Borders will probably be less aggressive with initial buys and could find itself out of stock in the face of a hit—not a good situation for either party. On the other hand, having to sell all of the books it purchases most likely means Borders will more aggressively market HarperStudio titles—just the sort of incentive lacking in the current system.

It can’t have escaped the attention of anyone in the book business that we’re working through the toughest trading conditions that any of us have experienced. In the course of just a few months, we have become accustomed to a flood of bad news from our industry—declining book sales in most outlets, significant job losses, traditional sales channels shrinking and consolidating, and consumer confidence at an all-time low. If you add into the picture declining literacy skills and the apparently irresistible attraction of other types of media, it’s tempting to succumb to persistent pessimism and certainly to abandon the view that comforted many for so long—that we work in a recession-proof industry.