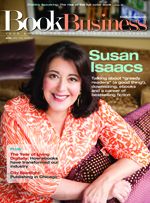 In 2006, after a career as an editor and writer for publications such as Outside, GQ and The New York Times Magazine, John Tayman's new book, The Colony, was doing well, and Scribner urged him to start thinking about a second book. Three things gave him pause. First: "I had just finished a long slog on a single book and was not so eager to jump into something of that size immediately."

Secondly: "I could see and recognize significant changes afoot as the industry moved from analog to digital."

One evening this past January, we co-hosted a party at Michael’s New York celebrating the winners of the Saturday Evening Post’s Great American Fiction Contest (congratulations again, Lucy Bledsoe!). During the event, Steven Slon, Editorial Director of the Post, leaned over to me, pointed toward the tables in the front of the restaurant, and said, “Do you know who’s out there?” Turns out, we were there at the same time as the Adam’s Round Table, a group of illustrious mystery writers who meet monthly at various New York restaurants. (Some of you may have read Jeffrey Toobin’s recent story about this in The New Yorker.) Later, as I was leaving our party, I found myself walking directly past this celebrated group.

What big issues do you see publishers thinking and talking about these days?

You can't toss a conference program without hitting someone talking about "discovery," particularly across online platforms. I wish that the conversation was a bit less driven by talk of metadata (although that matters a lot). Institutions like libraries play a critical role in discovering books, but they have been largely shut out of the digital conversation. That needs to change.

If Chicago publishing professionals agree on one thing about the city's publishing scene, it's that it is not easy to characterize. About to celebrate 175 years as a major publishing hub (Chicago's first publisher, Robert Fergus, set up shop in 1839), today the city is ranked second in the printing and publishing industry, behind New York.

Some of the area's earliest publishers still survive, among them Rand McNally (est. 1856). Many houses are long gone, for example Reilly and Britton, which published L. Frank Baum's beloved Oz books. Some, like Scott, Foresman & Co. have been absorbed by other publishers. In fact, if Chicago publishing professionals lament one change that has taken place over the past decade or so, it is consolidation, to which a number of local publishers have fallen victim.

After 35 years of writing novels—not just novels, mind you: bestsellers—Susan Isaacs has a very clear understanding of how the book publishing industry works. Her take on the business from the perspective of a prolific author (13 novels and one book of nonfiction) offers unique insight into how and why things are changing.

Isaacs loves to tell the story of how her first book came to be published in the late 1970s. A former editor of Seventeen magazine and a freelance political speechwriter, she was home with young children and living in Long Island. "I wrote a mystery. It was the usual [situation of] reading too many mysteries and then saying, 'I think I can do this.'" A school acquaintance of her husband's was managing editor of Simon & Schuster and offered to read the book. He liked it, and told Isaacs, "You don't expect friends to write a good book!"

The Insights of "Big Brother"

When a person interacts with a computer—whether browsing the web or using an ATM—the computer typically maintains some kind of record of the actions the person took with the system. This is sometimes referred to as "data exhaust": information that is the natural byproduct of the human-machine interaction.

Sometimes the analysis of this data exhaust reveals behavioral patterns through a process known as "user analytics." These analytics can provide insights into how people behave, as individuals or in aggregate, and by implication how they think and feel. Businesses can use these insights, and consequently increase their effectiveness in the marketplace by being responsive to the pulse of the customer.

The Rise of the Full-Color Book

We know that books printed digitally have tended to be, like the old stitch about newspapers, black and white and read all over. For most of digital printing's existence, producing professional four-color books just wasn't possible; you had to use offset. But the times they are a-changing, and technological advances are making the production of full-color books in longer short runs more feasible and economical than ever before. The advent of sheetfed digital printing brought us the ability to print full-color books in very short runs—it was responsible for opening up the high-growth photo book market. Now "4-up" and roll-fed "printer/presses" are further changing the full-color publishing paradigm.

Before we go further, let's define some terms, as printers are, in essence, quite different from presses. Printers regenerate the impression for each copy from a digital file, which allows them to use electronic collation and print the pages of a book block in order. Presses, on the other hand, use a physical image carrier (a plate) to reproduce large printed sheets which are folded into signatures, gathered and bound. But printers become, in essence, presses when either the sheet size or output speed starts to approach the specs of an analog reproduction device (aka a press). A "printer/press" is my term for printers that have many characteristics of a press.

The Year of Living Digitally

After years of obscurity, the e­book has become a full-fledged disruption for publishers—supplanting print sales in North America and Europe, and threatening to do so throughout the developing world. Influenced by rapid changes in handheld, portable devices, as well as new pricing and supply chain models, e­books represent both problem and opportunity for publishers. Rather than attempting absolute predictions, it may be more helpful to assess the current situation—and the many remaining obstacles to e­book adoption and profitability—all with an eye toward discovering ways for publishers and their partners, at least in theory, to thrive in this new environment.

There’s no need to detail the history of e­books, except to point out a specific turning point: Amazon’s 2007 combining of E Ink devices with its enormous e-commerce potential. The Kindle phenomenon transformed e­books from novelty status into a viable consumer trend, especially for narrative text reading. The big question today is whether the tablet trend marks a similar, fundamental transformation in e­book consumption, or just an incremental step in the process.