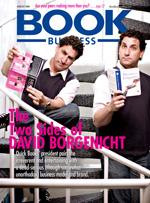 45 Number of James Patterson titles that have appeared on The New York Times Best-Seller List—a Guinness World Record. Patterson received the honor from Guinness at this year’s BookExpo America.

Keepers of the Brand

After college graduation, I was saddled with the challenge of wielding a liberal arts degree in a tough job market. My strategy was to throw myself into technology and grad school. Many classmates of mine went the traditional publishing route, nabbing junior editorial roles. This was … ahem! … a few decades ago, and the starting salary was around $15,000. In New York City. The feeble compensation was rationalized by the fact that publishing was a “glamour” profession, and since the editor was at the epicenter of prestige, many jumped at the chance to get these positions.

Digital book printing, be it in the form of short-run or print-on-demand (POD), has unquestionably transformed the book business. While no longer in its infancy, digital printing and its economic benefits still remain a mystery to many publishers. Industry trade groups like the Book Industry Study Group (BISG), with its mission statement of “working to create a more informed, empowered and efficient book industry,” are pushing to further publishers’ understanding of the technology and its strengths and limitations. BISG’s forthcoming “Print On Demand for Dummies” book, created in collaboration with John Wiley & Sons and set to debut this summer, aims to help demystify the business of POD with a number of industry case studies.

What’s the most cost-effective way to market to libraries? How do I find and work with a distributor? Does a social media marketing plan make sense for my company? How do I make more money with special sales?

Should You Be Outsourcing Your Distribution?

As the second quarter of 2009 drew to a close and a subdued BookExpo America winded to a conclusion, the news from the book publishing industry continued to be mixed at best and, in some cases, downright depressing.

The Two Sides of David Borgenicht

Amid the gussied up romances, male action fables and screenplay-bound interpersonal dramas making up The New York Times’ trade fiction best-seller list, one book stands out like a corpse at a wedding. It’s called “Pride and Prejudice and Zombies,” currently the only book on the list to combine gory scenes of zombie mayhem with the romantic exploits of a beloved Victorian-era literary heroine. Nothing in the book world in recent months has made the kind of splash (or should we say, splatter) that this title has, from the frantic Internet buzz greeting the announcement in February of its publication to the huge sales following its release this spring. The book has even been added to the curriculum at several university English departments.

One night recently, I woke suddenly, due to a horrifying dream about … do I dare admit it? … Twitter. The dream made no real sense; I was tweeting—or posting, for you non-Twitterers—quotes from various people in the book publishing industry, one quote after another, but I couldn’t post them fast enough. I have similar work/stress-related dreams quite frequently, but I was amazed that I had one about Twitter—tweeting is one of the simplest things I do. So why the tweet dreams?

What We Should Learn From Amazon

Last year, Amazon’s 10-K filing with the U.S. Securities and Exchange Commission listed publishers as its competitors in addition to bookstores and others—which started a flurry of chatter in the industry concerning the threat the online retailer poses to publishers in general. The nervous types worry that Amazon will eventually remove the need for middlemen like agents, distributors and even traditional publishers, as they create a one-on-one author/reader experience and purchasing system.

Your Guide to Industry Salaries

An old proverb states: “It will not always be summer”—in other words, be prepared for bad weather or bad times. Economically speaking, it is certainly not summer, and the book publishing industry has been no exception to those affected by the recession. The bottom line: If you didn’t get a raise this year, you’re not alone.