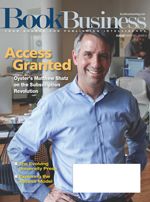 Roughly $5.5 billion of the over $8 billion higher education textbook market is caught in the secondary market. This is lost revenue that would otherwise be invested into the development of valuable new learning technologies

As is clear from the editorial coverage in this issue of Book Business, the industry is abuzz with talk of the new subscription economy and its impact on how books are discovered, accessed, and monetized. If this is the discussion that has taken center stage, in the wings persists a rumbling over how new technologies and content platforms are affecting the very nature of the book as we know it.

Published in October of 2013, The Content Machine explores the publishing industry in crisis, disrupted by digital innovations, yet continuing to adapt. Written by Michael Bhaskar, digital publishing director at Profile Books, The Content Machine outlines a theory of publishing that allows publishers "to focus on their core competencies in difficult times while building a broader notion of what they are capable of

The industry is abuzz with talk of ebook subscriptions. Media reports regale the emerging subscription platforms as the "Netflix of books" and a boon for consumers, while industry pundits view the subscription model more cautiously, wary of the potential cannibalization of retail sales

Publishers are adopting crowdsourcing platforms in order to empower readers and authors without losing them to pure self-publishing platforms.

Though the very word "interactivity" conjures images of electronic gadgets, things to swipe, and other bells and whistles, it isn't a new concept for children's books. Publishers have been designing interactive content for quite a long time

Minding the Bookstore Redux: How a Mentality Turned into a Mistake

A few years ago, when I was reading several annual SEC reports from the soon-to-be defunct Borders Group, I came across a sentence that not only defined the dysfunction of one retailer, but the dangerous mindset that has been crippling the book industry for decades.

New Ereading Platform Bridges the Gap Between Publishers and Teachers

Qlovi, an ebook distribution platform for K-12 learning, has one foot in trade publishing and one in the classroom, says Shira Schindel, vice president of content acquisitions. "We are in a great position to help those industries connect," says Schindel, "There are many challenges in the educational market that are not always on the forefront of a publisher's mind."

Today readers want more than digital content, argues Matthew Shatz, head of strategy and partnerships at Oyster. They want access. The proof of that, he says, is in the rapid rise of access models like Netflix and Spotify.

There are three factors at work that has driven this focus of interest on subscriptions. First, the launch of a number of high-profile initiatives, such as the consumer-oriented Oyster service, has gotten the attention of the industry since the beginning of the year. Second, there is increased clarity among publishers as to the level of revenue they can expect from ebook sales.

The State of the University Press

When Alison Mudditt took over as the new director of the University of California Press a little over three years ago, after spending nearly a quarter-century working in the scholarly publishing space for commercial houses like Blackwell and Taylor & Francis, to say she had her work cut out for her would be a tragic understatement

Weighing the Value of the Literary Agent in the Digital Age