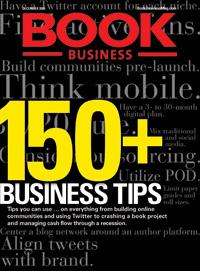 Effective cash management is critical to the health of any business, but the recession and associated credit crunch have made paying close attention to managing cash more important than ever.

35 Tips for Crashing a Book

At a time when consumers expect an instantaneous flow of information, and technological advances have facilitated expedited workflows, more and more book publishers are choosing to “crash” books—that is, produce a book from manuscript to final product on an abbreviated schedule, sometimes in just a matter of weeks. Yes, weeks. Many times, a crashed book is tied into a headline-grabbing event—think Michael Jackson’s untimely death, or Sarah Palin’s vice presidential nomination—where capitalizing on the momentum of that event in the public consciousness is critical to the title’s success.

For better or worse, Twitter has become part of our culture. While some people still may not see the value in engaging on the online social networking tool, many do. According to ComScore Media Metrix’s October figures, Twitter had more than 20 million unique visitors in the United States in September. Many businesses find Twitter useful for connecting with customers, and publishers are no exception.

Traditional marketing has taken a beating in the distressed economy, but many book publishers are relying on social media efforts to reach new, targeted audiences. While some publishers are unsure about the impact of social networking on book sales—and whether any time or monetary investment is worthwhile—other publishers who are actively engaging in social networking and building online communities around content and authors believe its impact is significant.

Just two or three years ago, “green” was a hot topic in publishing, as publishers competed to adopt meaningful paper policies, and several high-profile titles were published in environmental packages. But with the economic downturn, much of the talk of “green” initiatives was replaced by a new “green” imperative: the need to preserve profits and cash flow.

8 Tips for Driving Digital Change in Your Company

Here are the best ways to begin or continue to get traction in the digital realm in 2010.

Widgets, tweets, social networking, mobile apps, digital distribution formats—the industry seems to be on the upward slope of a mountain of change. Here’s Book Business’ list of tips, compiled from a range of change-management experts and sources, to help you manage some of the changes better. Whether it’s in production processes, marketing, author negotiations, or driving the very direction of your business, these tips can help prepare you to approach change from a better vantage point.

200 Number of Waldenbooks mall-based stores that Borders Group Inc. will close in January. One-hundred-thirty mall locations will remain open. According to a Borders press release, the retailer hopes the closings will result in “a smaller, more profitable mall chain in fiscal 2010.”

I recently became a follower of Khaled Hosseini, author of “The Kite Runner,” on Twitter. I was shocked to see that he had only 920 followers. Not that 920 is necessarily a small number of followers … but it’s Khaled Hosseini, for heaven’s sake. I started looking for some of my other favorite authors. I couldn’t find Barbara Kingsolver (“The Poisonwood Bible” is one of my all-time favorites) on Twitter, but she did have a Facebook profile with 3,845 fans (now 3,846).