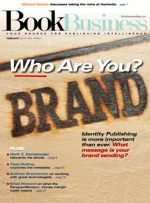 3 Tips for Winning Buy-In for Your Content Marketing Strategy

Companies across the globe are full of executives who believe in the traditional model of digital marketing and may need a little convincing to recognize that times are changing. You may also find that these executives are a bit jittery because their once tried-and-true tactics are becoming less effective. The well of consumer patience for constant interruption is exhausted.

App Watch: A look at what publishers are launching in the mobile space.

If you thought global atlas apps began and ended with Google Earth, now there's Atlas by Collins. Drawing on the HarperCollins UK imprint's rich history in map publishing, Atlas by Collins takes a different approach to geographic exploration. While not as granular as Google Earth and its grainy, stitched-together satellite images, Atlas by Collins focuses on beautiful, well-organized globes, all with full swipe and zoom functionality and arranged under three thematic headings: atlas essentials, people and power, and living earth.

Can I Sizzle You a Cigar?

I refuse to participate in recessions. While I'll readily admit that it is tough to break even, let alone increase sales, in this economy, trust me when I say that there are still plenty of opportunities for creative bookselling.

Michael Pietsch is Executive Vice President and Publisher of Little, Brown and Company. On April 1 he will step into the role of CEO of the Hachette Book Group. Here Pietsch shares some thoughts about his career with Book Business.

Everything You Thought You Knew About Metadata…

It's no surprise that there's a lot of confusion around metadata for books. It's complicated. If only they hadn't used the "M" word—metadata. It reeks of digital complexity. And then you read the standard definition: "Metadata is data about data." Gee, thanks. As if your eyes hadn't already glazed over.

Technological developments are regularly presenting a raft of new challenges and choices. Through it all, publishers are continually being asked to demonstrate their utility. With self-publishing a click away, authors ask publishers, "Do we still need you?" If printing and distribution can now be accomplished at a much-reduced cost and degree of complexity, must publishers redefine their raison d'être? Are publishers having an identity crisis?

On The Road To Find Out

We here on the editorial team of Book Business think of ourselves riding a figurative white panel van, sirens blazing, rushing to the scene of the latest book publishing happening. We come when you call us with news or concerns; we come when we hear of important developments. Once on the scene, we use our specialized training and tools to analyze news and trends and to unravel and clarify publishing business challenges and opportunities for our readers.

Growing up doesn't really end at age 20, so why should young adult fiction stop there? The New Adult genre, a growing subset of young adult lit, aims to give voice to the post-high school experience and its implied transition to independent living: college, moving away from home, traveling, starting first jobs and even sex. The content may be darker and more mature than what is traditionally found in YA, and the protagonists range from late teens to early 20s, but the stories offer many of the same kind of identity challenges and coming of age narratives as their YA brethren.

Until the transaction is closed (likely late 2013 pending regulatory approval), official news about the Random House Penguin venture is expected to be scarce. And yet questions abound. Why did two of the biggest players in book publishing throw in their lot together? Will further contraction occur in its wake? Will this give the new entity more leverage in its negotiations with mighty Amazon? And if so, will it be enough to matter? We rang up four industry experts and asked them what—if anything—it all means for publishers and publishing.

The Brand's the Thing

The digital revolution was a huge win for the act of publishing. Content is now everywhere and can be purchased anywhere. But how, in this sea of content, do publishers who invest in the time-honored processes that ensure quality content communicate that? There are many methods to boost content discoverability—many are technical, many are strategic, and all should be tailored to the content and audience in question. The most powerful—and most resilient—method for improving your content's discoverability, however, is to inspire your once-passive audience to actively seek you out.

Technology folks have for decades gotten more than their share of ribbing. Much of the hilarity comes from the cultural friction between technical and the non-technical. This cultural divide was perhaps most cuttingly portrayed in the hilarious UK sitcom The IT Crowd, in which an IT staffer routinely answered the phone with the greeting, "Have you tried turning it off and on again?" Another IT support guy I work with in the past manned his post beneath a large sign that read "Lack of planning on your part does not constitute a crisis on my part."

The Revolution Will Be Digitized

The fixed-layout epub takes the fastidiously constructed ghost story for grownups to another level, incorporating an original score and a collection of text effects that are triggered as the reader turns pages "I was in many ways the art director and [e­book producer] Lillian Sullam was the technical director," says Danielewski on the phone from Los Angeles.

Will YA Revive The Short Story?

Once upon a time, there wasn't much market potential for YA short stories. These days, though, digital publishing has made one-off narratives an appealing format for readers and a powerful marketing tool for publishers.