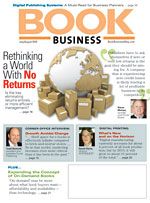 One sentiment that I hear quite often these days from book industry folks is that "it's an exciting time to be in publishing." And I have to agree. It's an especially exciting time for me to be taking over as editor-in-chief of Book Business magazine, particularly with technology progressing so quickly that it seems to change the book publishing landscape on a weekly basis.

Digital book printing overall is experiencing double-digital growth. The recession, although unwelcome in all quarters, has provided a boost to digital book manufacturing as publishers take a harder look at their processes and cut back on inventory and waste. Since digital printing market- and technology-research firm INTERQUEST's last major survey of the market, conducted in late 2007, the industry has seen widening adoption of digital book printing for short-run inventory management, and a growing interest in distribute-and-print to defray shipping costs and cut time to market—as shown in INTERQUEST's recent report, "Digital Book Printing: Market Analysis & Forecast (2010-2015)." A new generation of high-speed inkjet presses is also coming onto the market, promising lower cost, faster production speeds and higher print quality—all of which open the door a bit wider to digital book printing.

E-Readers - A Tale of Two Forecasts

Global research and advisory firm mediaIDEAS forecasted in a recent study that the U.S. market in 2010 for paid e-reader content will be approximately $460.6 million—consisting primarily of e-books sold to a user base of more than 8 million.

Once upon a time, there was the hardcover book, which was generally the only book format for about 500 years. Then, the mass-market paperback format was pioneered by German publisher Albatross Books in 1931. British publisher Allen Lane launched Penguin Books in 1935 with 10 reprint titles. Robert de Graaf, in 1939, issued a similar line in the United States, partnering with Simon & Schuster to create Pocket Books. The term "pocket book" became synonymous with paperback. Later, many publishers would offer paperback books, often published after the hardcover edition. They were 10 cents a copy when introduced and always less expensive than hardcovers. The low-priced, easily available book built the modern book industry.

62.4 million Estimated number of avid book readers—those who read five or more hours per week—ages 18 years or older in the United States, or about 28 percent of the 18-plus U.S. population. Avid readers purchase 10-plus books per year; 63 percent of them are women.

As a number of small, independent publishing houses struggled to survive over the last year-and-a-half, Nashville, Tenn.-based Turner Publishing, an independent publisher of specialty and trade titles, found itself presented with an opportunity: It could invest in its future by taking the bold step of acquiring other publishers that were seeking help, thereby growing its own assets, or it could play it more fiscally conservatively and stand pat.

It's difficult to imagine that the International Digital Publishing Forum's (IDPF) Digital Book 2010 could ever be compared to Woodstock; but, in fact, this year's sold-out event had a few sessions that were so crowded that dozens of people sat on the floor in the back of the room so as not to be in the way of the standing-room only crowd lining the room's back wall. Michael Smith, IDPF's executive director, joked that it looked like Woodstock.

Rethinking a World With No Returns

Returns remain a problem for the book publishing industry, although changes to the book-selling landscape brought about by Internet retail, e-books and new distribution models seem destined to make the issue loom less large than it did when mega-bookstores ruled the retail roost.

Complex systems, such as digital publishing platforms, are composed of a number of components that work together. Software architects often think of these components as being arranged in layers, or "tiers," like a layer cake.