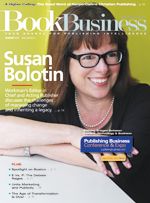 In many ways, Boston's publishing industry is a mirror on the iconic city. Though relatively small, the city and its publishing are known for history; for being a center for academics, thought and innovation; and for being a hub of independence and rebellion that triggers change. In these times of rapid transition in the industry, Boston just might be the place to see big changes happen in publishing.

After a 20-year stint in newspaper and magazine journalism, Susan Bolotin became the editor-in-chief of Workman Publishing in 2000; she is now also the acting publisher. She began her career at Random House, and then moved to Simon & Schuster, where she was the editor-in-chief of Touchstone Books. While there, she published The Road Less Traveled, which holds the distinction of being on The New York Times best seller list longer than any other book. She eagerly awaits the day — not many months away — when Workman's What to Expect When You're Expecting takes over that special spot in bookselling history.

Slicebooks today announces that it has secured funding from Ingram. See Publishing Wire below for details, and read our interview with  Slicebooks co-founder Jill Tomich here.

See You in September!

If you're doing what many Americans do this month, you're spending at least some of your time sitting on the beach reading a book. The "beach read" is an essential element of vacation planning, and we publishers work hard to get our books in those suitcases or on those not-quite-sand-proof ereaders. I suppose the quintessential beach read is a "trashy" novel, but for many it's just a good work of fiction, a compelling non-fiction read, or perhaps a trip back to the classics. Middlemarch, anyone?

Ebooks get a lot of attention, but there is another publishing world that exists in parallel with the commercial publishing world we see and know. It is the shadow world that evolved from the copier and later the digital printer — for the first time, individuals could make their own books.

The year 2013 will be known as that in which the current cycle of digital transformation will draw to a close. Those organizations that will execute significant changes to core business functions in order to realize new digital opportunities have already done so, or at least begun. Those that have not begun these changes are unlikely ever to do so.

In most publishing houses, marketing and publicity are separate departments. And they should be. Even though each is tasked with book promotion, their methods and responsibilities are actually quite different: Publicity reaches the consumer through the media, and marketing reaches the consumer directly. But just because they're different, it doesn't mean the two departments can't — or shouldn't — work closely together. In fact, in this ever-changing marketplace, they need to work together like never before.

When the subject of e­books versus print — EVP, if you will — is discussed, one sees passionate loyalty on both sides. This is good news for the art, science and business of publishing. Such passion shows that this long established format of encoding and exchanging knowledge has captured the hearts of millions who view books as essential to their lives. What it also does, unfortunately, is cloud the real issues. Partisan loyalty to old or new book formats can blind us to what makes a book valuable in the first place.