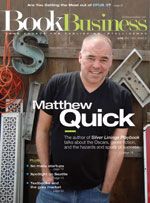 For Matthew Quick, author of The Silver Linings Playbook — the novel that became the Academy Award-winning film starring Jennifer Lawrence, Bradley Cooper and Robert DeNiro — success as a fiction writer came slowly, then gradually and then all at once.

Quick (who, in the interest of full disclosure, is a friend and was a college roommate at La Salle University in the early 1990s) took some time in March to talk to Book Business about his whirlwind life since his book hit the silver screen.

Are You Getting the Most Out of EPUB 3?

When EPUB 3.0 was officially unveiled at the Frankfurt Book Fair in October, 2011, it was taken by many as the spec to end all specs.

At last, we could really get to work creating ebooks with all the things we’d always wished for — basic things like the sophisticated typography and layout we can do in print, and beyond-print features like video and interactivity — as well as some things we hadn’t thought to want, like global language support and rich metadata. Not to mention something we knew we should do but that was “too hard” before: real accessibility. Best of all, we could make just one file that would work the same everywhere…

The euphoria didn’t last long. Sure, EPUB 3 told us how to do all those things; but did they all actually work anywhere?

That was 18 months ago. Guess what? Progress happens.

Atavist, a multimedia storytelling platform which launched in January 2011, has received acclaim for its unique mix of longform journalism and an innovative content management system. In fact, the company has already received high-profile investment backing from the likes of Marc Andreessen and Google's Eric E. Schmidt. Co-founder, CEO and editor Evan Ratliff says: "We are this kind of hybrid outfit in that we're not solely focused on software or publishing. We are a media and a software company."

This media/software combo wasn't in the original plan. The initial goal was to be an innovator in the space called longform journalism, pieces of 5,000 to 30,000 words meant to be read in one sitting. "We started as an outfit that just wanted to do publishing, and a certain type of publishing: These short [pieces] between book and magazine [length]," says Ratliff — books that would be "multimedia" and "enhanced." "In order to that, we ended up developing our own publishing software to publish to multiple devices at the same time."

Given the exponential proliferation of free and cheap digital content in the marketplace — to say nothing of the platforms upon which one can consume that content — it's never much of a challenge to find something to read. But finding something you want to read at a great price? Therein lies the rub. Enter BookBub, a Cambridge-based email recommendation engine that delivers daily ebook deals, for titles across a wide range of platforms, to its million-plus members based on their tastes and interests.

Last September, author Junot Diaz spoke to a standing-room-only audience at Town Hall in Seattle. Within the first few minutes, he gave the city props for approving a $122 million library levy the previous month. That’s how Seattle rolls.

It’s a book town and proud of it. Seattle always ranks at the top of the list of the most literary cities, dueling with Minneapolis and Washington, DC. Amazon and Costco are headquartered here. We thought we’d head to the Pacific Northwest and see what the publishing scene is all about. And what we found was a vibrant literary community with a lot of publishing options. It just doesn’t look like what you’d expect.

We know that the era of "big data" has already fomented great change in book publishing. But it's also making waves in book scholarship. Academics are exploring new and fascinating ways of analyzing literature not as specific works but as corpora: huge bodies of works spanning decades and even centuries.

In his new book, Macroanalysis: Digital Methods & Literary History (University of Illinois Press), Matthew L. Jockers, a University of Nebraska-Lincoln Assistant Professor of English, takes readers into what he modestly calls "this thing I'm doing." "To call it a field is perhaps premature," he says.

As the Book Industry Study Group report "Student Attitudes Toward Content in Higher Education" suggests, things are changing, and fast, for higher education publishing. And the Supreme Court's decision in Kirtsaeng V. Wiley is only going to hasten the speed at which higher ed publishers move to digital platforms for course content.

Enter GinkgoTree, a fresh-faced start-up from a group of former academics who, after bemoaning the lack of a cheaper alternative to expensive textbooks and a more elegant alternative to online course packs, decided that theirs was the solution they were waiting for.

Publerati, founded in June 2012, publishes original literary fiction exclusively in ebook format. Founder Caleb Mason held several traditional publishing jobs in the 1980s at Little, Brown and start-up Salem House Publishers, then "crossed over into technology" and "caught the heyday of software publishing in the '90s." It was the arrival of the iPad that spurred Mason's decision to return to book publishing. "I saw my first iPad a few years ago and read a book on it, and thought, 'This is going to be amazing for books. I gotta figure out how to do something with this.'"

He learned many lessons from his years at Konica Minolta and DeLorme, lessons that are now informing his publishing decisions, as he experienced the era of digital disruption in the photography industry. "I understand what it's like to be within an industry and looking around wondering, 'What's going to happen?'" Mason comments on how this disruption can often come from unexpected sources: "It wasn't the digital camera that had the biggest impact on traditional photography — it was the [mobile] phone."

Questions and Answers with Matty Goldberg of Perseus Books Group

I think every publisher, no matter what their size, is wrestling with a rapidly evolving marketplace, with discoverability for their titles, with the digital transformation of the industry and a host of other issues. They're thinking about these big issues while keeping the boat afloat — working as hard as ever on the book they're publishing here and now. It often feels like everyone in the industry is now doing two jobs — their old job and their still-forming new job.

The era of the monolithic print textbook is coming to a close. The Kirtsaeng decision is the latest indication that it is not sustainable.

Our country is in the midst of a growing "shop local" movement, urging folks to support their neighborhood stores, eat locally grown produce, and, in general, make staying close to home with their dollars a lifestyle choice.

As publishers, we can take this local movement to heart. You're part of a local scene, wherever you're based. Do you know your nearby colleagues? Get together with them? Attend or even create events that provide opportunities for networking? I urge you to talk to your local colleagues, talk them up, and support them by buying what they write or publish!