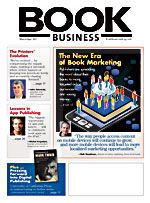 Strong interest exists among both publishers and consumers in a fundamentally different e-book model: content delivery through subscription-based services.

Since the beginning of 2010, for every 100 paperback books Amazon sold, the company reportedly sold 115 Kindle books across Amazon.com's entire U.S. book business.

While active with other forms of social media, I never really "got" FourSquare. When a friend told me about how businesses are involved, I became more intrigued.

98% of more than 600 respondents to a St. Louis Post-Dispatch poll who said changes to "The Adventures of Huckleberry Finn" should not be made.

Your website traffic will only grow when the crowds of would-be-interested Internet browsers begin to learn about your site, your books and your amazing content.

How Will E-books Impact Your Bottom Line?

The end of a calendar year is always an interesting time for the publishing industry and perhaps never more so than the close of 2010.

Digital, interactive book apps are booming, especially in the children's space, making this an exciting time to be an app publisher.

Recently named the new director of University of California Press (UC Press), Alison Mudditt is now at the helm of one of the largest university presses in the nation.

The New Era of Book Marketing

Publishers and authors are attending the hot cocktail party of 2011, but none of them are wearing fancy dresses or tuxedoes.

As is true of so many sectors of the economy in this volatile time, much is changing in the world of book printing, but not necessarily in sync.