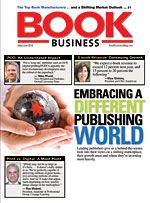 According to Simba Information's "Trade E-Book Publishing 2010" report, drawing data from a nationally representative survey, an estimated 9 percent of the U.S. adult population bought at least one e-book in 2009 (compared to an estimated 8 percent in 2008).

Perspectives on the shifting publishing marketplace, and threats and opportunities surfacing as a result, seem almost to have divided the industry. Some see print as holding fast as the primary bread-and-butter for publishers, with e-books and other digital products growing, but remaining as incremental revenue. Others see the current growth in e-book and new digital reading devices, and a younger generation of digital-bred readers pointing toward a future where "e" will be the primary revenue driver in most publishing businesses.

181% Increase from 2008 to 2009 in the number of titles produced by self-publishers and "micro-niche" publishers, according to Bowker, a provider of bibliographic information management solutions. These types of publishers produced 764,448 titles last year.

Printers Adapt by Following the Market

Whether it says more about recent positive trends or just how awful 2009 was, one thing every printer seems to agree on is that things are looking up in book manufacturing. This, at least, is the consensus among executives interviewed by Book Business as part of its annual assessment of the state of book manufacturing, which includes our list of top North American book printers ranked by book revenue.

The advent of digital media has long threatened publishing's most fundamental processes, as publishers grapple with delivering their offerings in multiple formats and to multiple devices, simultaneously and with equal quality. Now, after years of delay and procrastination, publishers are beginning this process of fundamental change.

With a trying 2008 and 2009 behind us, most publishers who attended the 2010 Publishing Business Conference & Expo (PublishingBusiness.com), March 8-10, seemed, at the very least, less worried about the future than they were last year, and, in fact, most were quite optimistic. The conference theme, "Publishing at a Tipping Point," was the unifying force behind more than 60 educational sessions presented by 150 speakers from all walks of the publishing industry. The presentations and discussions focused on industry shifts and practical information to help publishers adapt and thrive.

In many industries, there is a moment that changes everything. For the horse-drawn carriage manufacturers, it was the invention of the automobile. For the telegraph company, it was the telephone. For the music industry, it was MP3 downloads. And for book publishers, it appears to be the e-book—or is it?

What’s in a Format Anyway?

A friend of mine was diagnosed last year with a brain tumor. She underwent something like 30 days straight of chemo- therapy. She was temporarily blind, obviously  extremely sick and, one would think, terrified. But her outlook during the entire process was amazing. She was optimistic, celebrated each small hurdle and kept going, seemingly undaunted by the road ahead of her. She told me that when she was diagnosed with the tumor, she had read a number of books on Kabbalah, and apparently it gave her a new perspective with which to deal with the challenges she was facing.