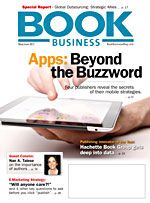 
Not tied to a specific title, this app is a project of HarperCollins' Collins Geo, which is best known for "The Times Comprehensive Atlas of the World" but also offers data solutions to the likes of National Geographic, the United Nations and the defense sector. Fragile Earth employs stunning photography and satellite images to depict a world in flux. The interface allows users to swipe multiple layers across the screen to illustrate, for instance, how irrigation projects have all but dried up the once-massive Aral Sea (juxtaposing images from 1973, 1986, 2001 and 2009) or the effects of last year's earthquake and tsunami on Japan.

The 2012 Publishing Business Conference & Expo brought together more than 1,300 industry experts and solutions providers for three days of education, idea sharing and opportunity at the New York Marriott Marquis. This year's conference theme, "Cashing in on Cross Media Content," highlighted emerging opportunities for magazine and book publishers. It also aptly described the optimism among speakers and attendees at this signature event for publishing professionals.

Not too long ago, just making an app made news—especially in the book world, where the utility (and desirability) of book apps was a subject of some debate. As publishers have come to see books as multimedia brands, however, the terms of the debate have shifted, from whether book apps have a place to when. Apps can accomplish many things when executed right—from content enhancement to marketing to fun and games, helping publishers meet audiences where they are and build loyalty to books, brands and authors. Realizing this, a few companies have gotten pretty sophisticated in their, ahem, app-roach, as the following examples show.

While only the most severe of futurists predict print's total demise, most publishers have accepted that digital products need to be a slice of their revenue mix, and a growing slice at that.

Yet it's one thing to recognize that change must happen; it's quite another to enact that change, especially when you can't exactly hit pause on your business while you reconfigure your workflow, to say nothing of tackling that massive backlist.

That's why many publishers are turning to the wide world of service providers who make it their business to help publishers solve digital content and digital transition issues.

As the digital deluge continues, book publishers will either embrace data and technology, or drown in it. Organizations must either chart a course or get swept up in the current.

It is for this reason that Book Business magazine named as 2012's Publishing Innovator of the Year in book publishing the Hachette Book Group.

Nan A. Talese on Publishing: “It’s the Authors Who Count”

In short, the imprint is an imprint of authors. They all share a love of language beautifully used, a gift of storytelling and a passion for their subjects. It has been marvelous to see the readers of these superb writers increase through the years. Eventually Pat Conroy followed, even though I had only become his editor with "The Prince of Tides" at Houghton, where all his previous novels were published—he was truly a house author but had had a different editor for each book. However, we worked very well together.

Read This Article  Before Putting Anything Else on the Internet!

The tools we use to find content are changing and becoming more intelligent. Google can now distinguish between content that people find actually useful and content that has been perfectly optimized to game their system. Obviously, it is in Google's interest not to be gamed.

Studies, Statistics and News You Can Use

Print Vs. E:  No verdict yet: Of the 14 percent of Americans who read both print and ebooks, an April 2012 study by the Pew Research Center found that 36 percent prefer ebooks, while just 24 percent prefer print—leaving some 40 percent without a preference.

So let's see. What's happened in publishing since the last issue of Book Business? Why don't I just take a peek into my inbox and browse the subject lines of Publishing Business Today (bookbusinessmag.com/newsletter), the daily email newsletter of aggregated publishing news headlines James Sturdivant and I put together…

Want to Grow Your Ebook Revenue?

About 17 years ago or so, digital media folk were asking an important question: Would consumers buy online? Would consumers take the leap and actually enter their credit card information on a seller's website? More specific questions also arose about the growth rate of online commerce.