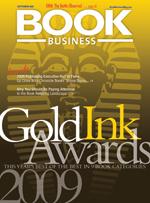 It is a difficult time to be an independent book publisher. Fractured distribution models, soaring manufacturing costs, technology changing at breakneck speeds and the ongoing global recession are just a few of the threats coming at indies from all directions.

Digital rights management (DRM) is the most contentious topic in the world of digital media. The battle over DRM shows no signs of abating, and its outcome will shape the digital media landscape for decades to come.

3 Number of titles Harlequin Teen will publish in 2009, beginning with the late-July release of “My Soul to Take,” by Rachel Vincent. The imprint—which launched in July and is aimed at readers 12 to 18 years old—plans to release 17 titles in 2010.
Source: The Wall Street Journal, July 21, 2009

If the Internet has taught traditional media anything, it’s that valuable content should be protected or it will quickly lose its worth. Letting music, news articles or whatever fall into the hands of those who do not value it has been toppling old media companies left and right, and is likely to continue. Take newspapers: Had their stories not been copied, pasted, snarked upon and uprooted far from their original sources (and the advertisers), there wouldn’t be nearly as many journalists in the unemployment line today.

I was somewhat surprised to learn, through our annual reader survey, that almost 50 percent of Book Business readers do not currently offer e-books. And, of those who do publish e-books, most offer e-books of 30 percent or less of their titles.

When Shona Burns first entered college, she was unsure of what she wanted to study. “I started out doing a business studies degree,” she recalls. “I was bored rigid. … I had met a couple of fellow students who were getting a publishing degree and found what they were talking about a lot more interesting than what I was doing myself.”