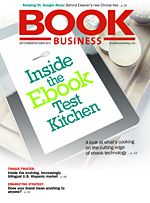 Ironically enough, success in digital publishing has more to do with people than machines. Digital publishing requires publishing houses and their partners to work in materially different ways. Digital publishing is not merely delivering an EPUB file along with a print-ready PDF. Successful initiatives require the development of new skills, processes and business practices. Publishers that successfully execute these changes will be able to take advantage of the unique characteristics of digital, and bring new value to the marketplace.

Ripley's Believe it or Not! has released a "container" app which works as a portal to the company's various publications and museums. If that sounds a bit dry—well, this is Ripley's, and the app (developed over the course of a year in partnership with Conjure) is anything but. Users are treated to photo galleries, Ripley's Twitter and Facebook feeds, museum information and (in the near future) downloadable magazines and cartoons. The core of the app's appeal, however, is an Image Recognition (IR) feature dubbed oddSCAN, which Ripley's intends to incorporate into all of its products.

Does Your Brand Mean Anything to Anyone?

Publishers have been blessed with the gift of invisibility. For the last several decades of modern book publishing, the industry's "top-down" distribution model has allowed publishers to stand behind the scenes—working tirelessly, but not publicly—to make sure high-quality and important content found its way to the world's stage. This shroud of invisibility has long protected publishers from suffering the worst effects of their worst failures, and it has granted them certain freedoms to take the risks required of a publisher—on new authors, on new topics, on new ideas, etc. Colossal failures during these years may have tarnished the author in the readers' minds, and the booksellers who recommended their steaming pile of a book, but not the largely invisible publisher—who lived to publish another day.

Getting Your Words' Worth

Scores of our generation's most celebrated authors have famously waxed poetic about the joys of using the original 20-volume "Oxford English Dictionary." David Foster Wallace, for instance, had a well-documented obsession with the OED. Simon Winchester wrote not one, but two nonfiction books about the dictionary's history. Even J.R.R. Tolkien, who briefly worked on the OED (he was assigned to the letter "W"), spoke fondly of his time there. But the simple fact is this: When I need to know the correct spelling of, say, "onomatopoeia," or "conscientious" or "hierarchy," there's a decent chance I'll be heading straight to Dictionary.com.

This summer, Harper­Collins announced it would be launching a global publishing program called Harper­Collins 360, designed to increase availability of the publisher's titles across all English-speaking markets.

The idea is to use a network of print-on-demand [POD] facilities located in regional warehouses so that any title in English will be available in any English-language market, making rights, and not technology or geography, the only impediment to getting a book into a customer's hands.

Inside the Ebook Test Kitchen

It doesn't seem so long ago—and that's because it wasn't—that referring to "the cutting edge of ebook technology" was redundant. Ebook technology itself was the cutting edge: File-based delivery of tomes was the driving force behind all of the messy disruption in so many publishing houses in the last 10 years.

In an age of instant information access, professional and scholarly publishers have to get smarter when developing products to fit audience workflows. Simply having a large catalogue of titles is no longer enough; from finance to education to STM, users expect information to be tailored to their day-to-day needs and priorities. Meeting these requirements can spell the difference between a successful product and a dud.

Around the time I started working in trade publishing, Stephen Hawking's "A Brief History of Time" was a huge bestseller, clocking sales at record rates. I was impressed, and still am, but my thinking on what these numbers meant was altered by the comment of a colleague: "Just because people are buying the book, doesn't mean they're reading it."

And, of course, it's true. Hawking's book was a trendy intellectual purchase. Drop a copy of this much-talked-about dense and brainy bestseller on your coffee table, and guests were sure to gain a favorable impression of your erudition. But speak knowledgably about black holes, quarks and antimatter? Mere ownership of the tome did not such conversations guarantee.

You walk into the bookstore, past the tables of "Books for This Month's Holiday," and find your way to the Foreign Language section. Bring up your bébé in French; speak Chinese like a Tiger Mom; have a conversation in Russian that would warm the cockles of Putin's heart—it's all here. And if you already know a foreign language—Spanish, say—you'll also find novels and self-help books right next to "500 Spanish Verbs."

As I was writing this on the very cusp of Labor Day Weekend, my South Philadelphia neighbors were preparing for something very special: The Boss, Bruce Springsteen, will be playing two shows at Citizens Bank Park over the holiday weekend. The Asbury Park legend is an adopted favorite son (plus it'll be about the only interesting thing happening in the ballpark this summer).