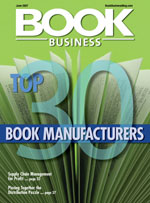 ‘The Green Book’ Uses Celebs, Tips to Appeal to the Public

Green is the new black … or is it the new pink? Either way, green is in. With more and more of corporate America joining the green movement, environmental sustainability continues to gain momentum in society. But the decision to do one’s part to help the environment starts with the individual, which is exactly who one publisher is betting on with its launch of “The Green Book” this month. “The Green Book,” penned by Elizabeth Rogers and Thomas M. Kostigen, is a collection of more than 400 tips people can incorporate into their everyday lives to make a positive impact on the environment. Most

Barnes & Noble Inc. recently reported that sales for the first quarter of 2007 increased by 3 percent to $1.1 billion compared to the prior year’s first quarter. Store sales reportedly increased 3.3 percent to $1 billion and BarnesandNoble.com sales were up 8 percent to $93.8 million, also compared to Q1 of 2006. The increase in sales was attributed to some successful titles including: Rhonda Byrne’s “The Secret,” Chris Bohjalian’s “The Double Bind,” Mohsin Hamids “The Reluctant Fundamentalist,” and others. For the second quarter, the company anticipates comparable store sales at Barnes & Noble stores to increase in the low to mid single digits,

The Book Industry Study Group Inc. (BISG), a trade association for book industry standards, policy and research, is scheduled to announce its annual book sales estimates and forecasts in both dollars and units for the time period of 2005–2011, today during BookExpo America (BEA) at the Jacob K. Javits Convention Center in Manhattan. The estimates are part of the 2007 edition of “Book Industry Trends,” BISG’s research publication that has provided a view of U.S. book publishing sales for the past 30 years. The preview at BEA will feature highlights from the new publication, a description of the research methodology and sources of

Online independent-publishing marketplace Lulu.com and R.R. Bowker, the U.S. International Standard Book Numbers (ISBN) agency, have partnered to provide Lulu.com users with the opportunity to purchase ISBNs for their self-published books. This is the first time that New Providence, N.J.-based Bowker, the sole distributor of ISBNs in the United States, has partnered with a company to offer individual ISBNs. These 13-digit, bar-coded numbers are used by publishers and retailers to facilitate the sale and distribution of books. Lulu.com, with headquarters in Morrisville, N.C., is offering the ISBNs for $50 per number through its “Published By You” distribution service, which allows authors to publish

As CEO and president of iUniverse, Susan Driscoll has helped the pay-to-be-published online publisher to become an attractive alternative to the sort of traditional publishing houses at which she once held executive-level positions, including HarperCollins, Henry Holt and Holtzbrinck Publishers. An affordable avenue for aspiring authors seeking to get published, iUniverse has become one of the largest self-publishing companies since its launch in 1999. Driscoll, who co-penned the book “Get Published” last year, not only is the top executive at the company, but also a mentor to iUniverse’s roster of authors. Where do you see book publishing heading in the next five to 10 years?

Piecing Together the Distribution Puzzle

If distribution means getting books into the hands of sellers, circulators or readers, then a true profile of the distribution business would cast a wide net, beginning at the binding line and continuing through to the ‘long tail’ of online portals, used bookstores and curbside pushcarts. However, if distribution, from the publisher’s view, means getting books to generate sales revenue, we can overlook all of the aftermarket, recirculation and reselling channels and focus solely on reaching stores, libraries, online and catalog warehouses and—increasingly, thanks to the Internet—direct marketing from the publisher to the consumer. In the article “Deconstructing Distribution,” in Book Business’

Spotlight on the Supply Chain

Supply chain management is a hot topic in the industry, and as the industry continues to evolve in a rapidly changing marketplace, it is drawing more and more attention. Recent Book Business articles have explored big-picture supply chain thinking (search for “supply chain” on BookBusinessMag.com), and in this issue, the topic is put under the microscope. In his article “Supply Chain Management for Profit,” writer Jim Sturdivant explores how some leading publishers are automating supply chain management to eliminate waste—in time, process and inventory—and improve the bottom line. This article also explains that while examining the supply chain can have a significant impact

When it comes to improving the supply chain function in book publishing, the watchword is communication—between various components of the chain, and especially between manufacturing, distribution and retail. Saying this, however, is not saying nearly enough, as the quality of information and the way it’s used matter just as much as making the right connections. “Communication is the No. 1 supply chain issue,” says Rich Eby, director of inbound distribution at Thomson Learning, the Stamford, Conn.-based provider of educational, training and reference books for academic and corporate customers. For Thomson, that means anticipating shipments from manufacturers around the world for distribution in the

If 2007 goes down as “The Year of RR Donnelley,” it will do so as a result of a 65-day span at the turn of the year during which the conglomerate announced it would acquire three industry stalwarts: Perry Judd’s, Von Hoffman and Banta Corp. But the past year has been about more than consolidation and leveraged buyouts. North American printers continue to grapple with the mounting menace that is offshore manufacturing, fluctuating paper prices amid a series of mill shutdowns, and the ever-evolving technological demands of their customers. And yet, despite these challenges, there are also a number of opportunities facing the market.

University Presses and the Digital Universe

The Association of American University Presses (AAUP)—an organization of nonprofit publishers whose members strive to advance scholarship through their offerings—believes that the university press segment’s fundamental mission has not changed since America’s oldest university press, The Johns Hopkins University Press, was founded in 1878. However, the landscape in which its members operate has changed greatly, and the forecast calls for additional change in the future. As throughout the rest of the publishing industry, driving this change are advances in digital technologies. A varying segment According to Steve Maikowski, director of NYU Press, the university press world is divided into four major sales groups

USA Today announced earlier this week that it has signed licenses with four book publishers to publish books carrying the “USA Today” brand and featuring its graphics and content. During USA Today’s 25-year history, the newspaper company has expanded into the Internet, magazines, mobile and television programing. “With more than 5 million readers every day, USA Today has one of the strongest brands in news and information and has become a brand that readers know, enjoy and trust,” said Susan Lavington, senior vice president of marketing for USA Today. “The time is right to extend that brand into book publishing, calendars and other products