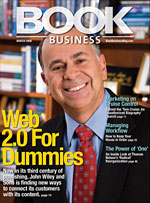 Corner Office: The Power of ‘One’

In a recent issue of Book Business, Christian publisher Thomas Nelson Inc. was cited as “the most radical example” of a growing trend toward internal consolidation in the book publishing industry (“Embracing the ‘Kindle Effect,’ ” February 2008). The article was referring to the Nashville, Tenn.-based company’s announcement in April 2007 that it was eliminating all 21 of its imprints, and reorganizing its publishing functions around consumer categories—a corporate restructuring it termed the “One Company” initiative. Michael S. Hyatt, president and chief executive officer of Thomas Nelson, spoke with Book Business about the goals behind the One Company initiative, the impact the

It was only 26 years ago that Leonard Shatzkin, the legendary, former Doubleday manufacturing director and industry consultant, wrote that the book industry’s use of computers to “measure the effect of forces amenable to management’s control … is close to zero” (“In Cold Type,” 1982, Houghton Mifflin). The last 25 years have seen the deficiencies discussed by Shatzkin dramatically addressed, and he would have to be impressed at the pervasive uses of the computer today. In part one of this series (“From Book Proposal to Profit,” Book Business, February 2008), I described in some detail the integrated, computer-coordinated workflow-management systems perfected by two university

If you look at “Tom Cruise: An Unauthorized Biography” as an equation—say, America’s most controversial A-lister + one of the world’s most titillating celebrity biographers + a secretive, litigious religion (+ as a bonus, a Writers Guild strike that has much of the entertainment biz on its heels)—you might guess that a publisher needs simply to sit back and let the money roll in. But that’s just never the case, is it? Yes, the book’s publisher, St. Martin’s Press, is reveling in the eye of what we’ll call a perfect storm of self-perpetuating buzz with the Andrew Morton-penned celeb-bio. Yes, prelaunch reports

When it comes to author negotiations, Florrie Kichler has it relatively easy. “As a publisher, I do the reissues of classic children’s book series,” Kichler says. “Most authors are dead.” Of course, even with writers who have shuffled off this mortal coil, there are still issues of rights and payments, and negotiations with families or estates. As the president of Indianapolis-based Patria Press and president of the PMA, the Independent Book Publishers Association, Kichler has an excellent vantage point on the challenges faced by publishers when negotiating contracts, whether with those living or dead. “I don’t offer advances, but I do offer a

41% Percentage of items purchased worldwide over the Internet in the past three months that were books, making books the most popular online purchase. In the United States alone, books were the second-most popular purchase (38 percent) behind clothing, accessories and shoes (41 percent). Source: Nielsen Global Online Survey, January 2008 5 Number of Top 10 best-selling novels in Japan in 2007 that originated as cell-phone novels and were later republished in book form. Usually love stories written in short, text-message-like sentences, cell-phone novels are originally composed and shared with fans via cell phones. The top three best-selling novels were written by first-time, cell-phone

On The Onion … and Deviant Reading Behavior

A recent story from satirical news source The Onion (www.TheOnion.com), entitled “Area Eccentric Reads Entire Book,” read: Sitting in a quiet, downtown diner, local hospital administrator Philip Meyer looks as normal and well-adjusted as can be. Yet, there’s more to this 27-year-old than first meets the eye: Meyer has recently finished reading a book. Yes, the whole thing. “It was great,” said the peculiar Indiana native, who, despite owning a television set and having an active social life, read every single page of “To Kill a Mockingbird” by Harper Lee. … Meyer, who never once jumped ahead to see what would happen

A commuter driving on the freeway. A businessman riding the subway. A stay-at-home mom exercising on an elliptical. If there’s one thing they all have in common, it’s that they can listen to an audiobook while going about their business. From self-improvement and personal finance to blockbuster fiction titles and biographies, the audiobook market is booming. Sales neared the $1 billion mark in 2006, and with increasingly busy lifestyles and the rising popularity of personal audio players, the industry is poised for continued growth. Bringing Books to Readers With Technology A 2006 survey by the Audio Publishers Association (APA) found that nearly 25

In the course of its history, John Wiley and Sons Inc. has seen 40 presidents come and go. Forty U.S. presidents, that is, in the span of more than 200 years in the publishing business. From humble beginnings in a print shop in Lower Manhattan, through eras of momentous change and extreme economic ups and downs, the company has stuck by its core principles: building relationships and meeting customer needs. “The overarching goal for us is not about books and journals or the Web, it’s about promoting knowledge and understanding, continuously adapting to change, and meeting the needs of the customer,” says William