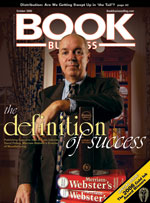 Behind the Industry’s Push for ‘Responsible Paper Use’

In its June issue, Book Business covered the newly created Book Industry Treatise on Responsible Paper Use, a formal effort to change the book industry’s environmental impact. The treatise reflects the input of 25 industry stakeholders—publishers, printers, paper companies and merchants—and sets industry-wide goals for change. The primary goal: to increase the average use of recycled fiber from the industry’s current 5 percent to 30 percent within five years. So far, the treatise has been signed by 118 publishers, two paper mills and four printers, and supporters are making a significant push to enlist many others. Book Business asked those involved in the

Children’s books may be about finding the kid in all of us, but everyone in the children’s publishing business agrees that they have to grow up when it comes to taking advantage of profitable opportunities. The Internet is clearly not going away, yet with the need to protect children from cyberspace predators, publishers have to go through parents to get through to their young audiences. Once you reach them, however, it can’t hurt to be as multidimensional as possible. Jason Wells, publicity and marketing director for New York-based Harry N. Abrams Inc., says kids are looking for books that are not just self-contained

Communications Works for Those Who Work At It

We’ve printed books locally, in Canada, and overseas. We’ve dealt with printing companies who couldn’t get much beyond the pre-press process and others that couldn’t manage shipping the final product. We’ve had companies use our projects to train their staff without our knowledge. We’ve had finished books held up in customs for months, sitting tantalizingly at a dock less than a day’s drive away. How, as a publisher, can you know what to expect from your printer? I’ve learned the hard way that, at least in the book printing business, size doesn’t matter. We’ve been burned by one of the 10 largest printers in the

Distribution:Are We Getting Swept Up in ‘The Tail?’

If there’s ever a good time to talk about the state of book distribution, this would be it. Right now, everyone is abuzz about changes occurring within the system thanks in part to the July release of Chris Anderson’s “The Long Tail: Why the Future of Business is Selling Less of More.” Anderson, editor of Wired magazine, declares the demise of common culture and cites occurrences called “long-tailed distributions,” or distributions to a greater number of smaller markets, rather than one, big mass market. According to Anderson, this helps distributors since they are no longer cut off by bottlenecks of distribution, such as limited

Falling for the Gold

It’s officially fall. And for us here at Book Business and many of you, fall can only mean one thing: It’s time for the Gold Ink Awards issue and the 19th annual Gold Ink Awards/Hall of Fame Banquet. This issue is a favorite of mine to work on—it’s jam-packed with success stories. Every piece that wins a Gold Ink Award, whether Gold, Silver, Bronze or Pewter, is a testament to the complex effort involved in manufacturing a book, something I feel privileged to get a glimpse of. It’s a unique feeling when you’re sitting on a train or walking through a park,

From Garage Publisher to Google Prominence

Evan-Moor Educational Publishers Inc. hasn’t always been a major player in the education market. In fact, the company got its modest start more than 25 years ago in a garage, with a staff consisting of three people and an entrepreneurial spirit. Today, Evan-Moor is home to 65 employees and is housed in a 20,000-square-foot facility churning out 60 titles a year in 35 countries. The company provides a compelling example of a publisher who has succeeded in areas other publishers have failed—generating online revenue, profiting from e-books and building an effective search engine strategy. Turning on a Dime It’s funny how a

Laura Waldron’s life is publishing. An author, a publisher and the marketing director of the University of Pennsylvania’s Penn Press, Waldron offers a perspective on academic publishing that is uniquely well rounded. After an internship at Carnegie Mellon Press piqued her interest in publishing, she cut her teeth in sales and marketing for Princeton University Press and eventually represented 15 different university presses in the Mid-Atlantic territory as a trade sales representative. Today, she is closing in on her 10th anniversary with Penn Press and is the author of “Museums of Philadelphia: A Guide for Residents and Visitors,” which was published in 2004

The Definition of Success

Merriam-Webster is a household name when it comes to dictionaries. In fact, its dictionary is said to be the second best-selling hardcover book in American history next to the Bible. So it might be surprising to find out that behind this book is a manufacturing department of just one: David Pelkey. Pelkey, Merriam-Webster’s director of manufacturing, oversees the manufacturing of all printed materials for the company. “I do all of the paper purchasing, warehousing and inventory management, and I also have a hand in distribution,” he says. Pelkey’s name may not be as well-known as the dictionary he helps produce, but this year, after