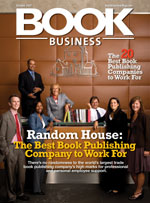 A Closer Look at the Top Companies

Depending on which study results you stumble upon, somewhere between 60 percent and almost 90 percent of Americans don’t like their jobs. And somewhere between 1 million and 1.4 million people call in sick every day. Sure, a percentage of those people probably have the flu, migraines or other ailments, but many of them likely have a serious case of Ihatemyjobitis. Book Business’ first annual study on the “20 Best Book Publishing Companies to Work For” explores which companies in the industry rank highest among their employees for overall job satisfaction. Each company that was nominated by its employees was rated based on

Believe It or Not, Ripley’s Latest Launch a Hit

Fans of the wacky and weird have been entertained by Ripley Entertainment Inc. for more than 85 years, and today the powerful brand is capitalizing on its considerable audience with another entry into its wildly successful book series, “Ripley’s Believe It or Not!” The newest edition, “The Remarkable … Revealed,” which marks the fourth installment of the series, launched in August with help from a powerful publicity campaign leveraging the ever-popular Ripley’s brand. Probably best-known for its attractions and museums, Ripley’s currently operates 64 attractions in 11 countries. However, the company also owns businesses in hospitality, television and publishing. Much of Ripley’s revenue comes

Industry Statistics: Looking Behind the Numbers

Ever since the Book Industry Study Group (BISG) hit upon the theme of “Making Information Pay” for its annual spring event several years ago, it has been filling the room with industry analysts and marketing and business development executives eager for new insights into the mysteries of our industry’s operation, well-being and future. The attendees are generally more interested, I think, in road signs pointing to where we’re going than in measures of where we are—more acutely aware that, in some ways, the information camera may not focus as well on today’s industry snapshots. Useful and reliable industry information always has been hard to

Random House: The Best Book Publishing Company to Work For

If a formula exists for creating a great work environment, Random House Inc. seems to have found it. The world’s largest trade book publisher has created a structure that strikes a balance between employee support and autonomy, overall corporate vision and individual contributions. Along with a strong ethos of promoting wellness and a healthy work-life balance, the company has, according to its employees, managed to foster a spirit of entrepreneurship and collective responsibility—no mean feat for a book publishing group with a combined workforce of more than 3,000 supporting the publishing efforts of more than 120 separate U.S. imprints. Fostering a great work

Sparking the Interest of Young Readers

The concept of offshoring—the practice of sourcing manufacturing or content management services overseas—is no stranger to the book publishing industry. Complex four-color work has long been sent to countries such as Italy and Japan, where the labor-intensive processes of producing art books (hand-stripping, contacting and working with film) were more cost-effective. Today, the same advances in technology that have had such a profound effect on publishing in general over the last 20 years—digital prepress work, real-time tracking of projects through the supply chain and instantaneous sending of digital files, among others—have opened the door to a true global sourcing revolution. “With Mac, Pagemaker,

When your stock-in-trade is information that drives innovation, people expect you to be on the leading edge. And so it is with the scientific, medical and technical (STM) publishing sector. While the STM market faces similar challenges to the rest of the publishing industry, its willingness to embrace electronic platforms and develop innovative revenue streams has positioned it well in the face of new competition brought about by the expansion of digital media. “The biggest challenge has been mastered, and that is the transition from paper to electronic for STM content,” notes Derk Haank, CEO of Springer Science + Business Media, the world’s

The 20 Best Book Publishing Companies to Work For

The Makings of a Great Company

This issue, featuring “The 20 Best Book Publishing Companies to Work For,” is one of the most rewarding issues I’ve produced in my career. It not only was an unbelievably challenging project to undertake, but it’s a chance to recognize those companies, like Random House (story on page 14), that truly appreciate the people who help them succeed, and that provide great workplace environments to attract and retain talented employees. Also, if you’re in the job market, it is also an opportunity to glimpse inside some other publishing companies. Sabbatical programs, 35-hour work weeks, flex time and other benefits geared toward