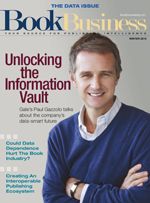 Could An Overdependence on Data Hurt The Book Industry?

Recent years have brought publishers greater access to data, and with it, more nuanced insight into everything from the topics that certain demographics are interested in to the completion rates of specific books. While most publishers may not aspire to replicate the latest literary fad to the farcical extent that Homer does, some in the industry have expressed concerns that an overreliance on data in service of reducing risk could stymie the creative aspects of title acquisition and diminish the vibrancy of the industry

new standards being developed and established standards being updated are increasingly produced in a spirit of collaboration, or at least with the goal in mind to avoid conflict with widely used standards. We're seeing real convergence occurring.

Paul Gazzolo had a sizeable task in front of him as soon as he took the job as senior vice president and global general manager of Michigan-based Gale in November 2014. His mandate: to turn Gale, a 60-year-old education, research, and reference publisher supporting libraries, schools, and academic institutions, into a global, patron-centered company

"Know your audience" is a common maxim among writers, one that pushes them to deliver the most useful or entertaining content they can for their readers. Yet knowing one's audience in a precise way has been a difficulty for book publishers up until fairly recently. Except

What Book Publishers Can Glean From Reading Behavior Data

Before the emergence of the ebook, data about in-book reading behavior was not easily available to publishers. With ereaders and reading apps, though, reading habits can be captured and analyzed on a large scale, tracking how quickly readers complete books and where they lose interest. Yet few publishers are using this behavioral data to inform their decision making. "Reading behavior data is probably actionable in some business models, and it might actually be actionable for us," says Jim Hanas director of audience development at HarperCollins

Whether Print or Digital, A Book’s Form Holds Meaning

Whether your prose is "purple" or "beige," engaging storytelling is what shapes our industry. And even the formats in which we publish are languages unto themselves -- conveying information, creating an experience, and ultimately developing a bond with the consumer. But with technology shifting the landscape, it has become necessary for us to respond more quickly, tailor our products, and