How Many Humans See Your Online Book Ads?

You might be surprised that I would raise such a strange question. Most marketers assume that people see the online ads they buy. Anyone can check the data that’s provided, such as the amount of ad impressions and the click-through rates. Yes, that may sound comforting. But, allow me to restate the question, how many humans actually saw the online ad?

Here’s the reality. Corruption has crept into the online ad industry at an alarming rate. The level of fraudulent digital advertising has the ability wipe out over half of a marketer’s budget. Put simply, for everyone dollar a publisher spends on online book advertising, 50 cents may vanish into cyberspace.

What’s causing this problem? In many cases, humans never see the online ad that they’re supposed to view. But, most publishers are unaware of the “wastage” they’re paying for. Below are three reasons why:

The Wall Street Journal recently reported, “Over 25% of U.S. internet users now employ online ad-blocking software on their desktop computers, according to new research commissioned by the Interactive Advertising Bureau.”

The New York Times reported that ad blocking software is even more popular overseas, “The figures are even higher in Europe, where 77 million people use versions of the software.”

Yet, this isn’t really the main cause for online advertising wastage. Keep reading because the problem gets really weird.

A pioneering online eye-tracking study by the U.K. research company, Lumen, revealed that only 9% of online ads are viewed for more than one second by consumers. In other words, 91% of online ads were never seen at all or they were scanned in less than a second without any cognitive connection or engagement occurring. How is this possible?

According to the Lumen research, the online advertisement “may not load in time. It may be ‘below the fold’ where it can't be seen. It may be the result of fraudsters who send a pixel that registers as a ‘response from a web server to a page request from the user browser’” trying to simulate human behavior. As you can see from the chart to the below, 46% of online ads that Lumen studied were not even visible to consumers. 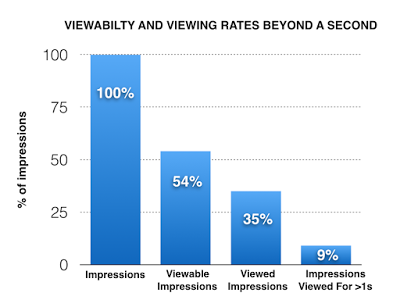 But, it gets worse. What about the remaining ads that are visible to consumers? Lumen found only 35% of them were actually viewed. And, of the ads that people did see, only 9% were looked at for more than one second!

Just because publishers are buying online ads doesn’t mean people are looking at the ads. To make matters even weirder, what if the “people” viewing the ads aren’t really people?

3. The robots are taking over.

Fans of science fiction like to fantasize about doomsday scenarios where robots take over the planet. We’re getting close that reality on the Internet. In the end of 2015, robots or “Internet bots” accounted for almost half of all Internet traffic according to a study by Imperva Incapsula.

That’s a staggering number, which brings us back to the question: What if the person who sees a publisher’s online ad for a book isn’t actually a human? We now know that a large percentage of page views, ad impressions, and advertising clicks are created by computer programs meant to simulate human behavior.

Some marketers mistakenly believe that dedicated advertising platforms, such as Facebook Ads and Google Adwords, are less susceptible to bots and fraudulent behavior. Again, the research paints an ugly picture. A study of Google, Yahoo, and Facebook by Oxford BioChronometrics in January 2015 yielded these results:

“Between 88% and 98% of all ad-clicks were by a bot of some kind, with over 10% of these bots being of a highly advanced type, able to mimic human behavior to an advanced extent, thus requiring highly advanced behavioral modeling to detect them.”

Internet bots are becoming so sophisticated that it’s hard to even detect their presence. For some people, this realization may provide relief and explain why the ROI is so low on their promotional campaigns. Real people aren’t seeing their ads, and the overall traffic data is deceptively inflated by malicious bot activity.

However, most marketers need to get their head out of the sand and acknowledge the amount of advertising dollars that is getting wasted. In this case, knowing reality is not half the battle. Instead, action needs to be taken to regain control of the dollars that you spend. I suggest the following steps as starting points:

Online advertising is here to stay and it can be an effective channel. This article does not suggest that companies abandon digital marketing altogether. Instead, it’s time for the online ad industry to admit the corruption that exists and clean up their act.

Books were created to be enjoyed by humans. It would just be nice know that humans actually see the book ads that publishers purchase.

P.S. – Many thanks to the Ad Contrarian who is helping to monitor and blog about the fraudulent practices within the industry.

Related story: Facebook Is Holding Your Readers Hostage But You Don’t Have to Pay the Ransom