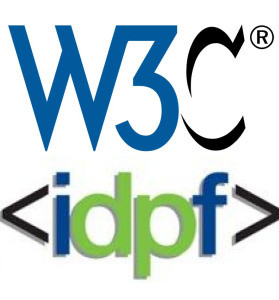 1 February, 2017 — The vision to align Publishing and Web technologies and create a new roadmap for the future of publishing became official today with the announcement that the World Wide Web Consortium (W3C) and the International Digital Publishing Forum (IDPF) have combined organizations. W3C is the global standards organization that develops foundational Web technologies such as HTML, CSS, SVG, XML and WCAG. IDPF developed the EPUB standard used globally for accessible ebooks and digital publications.

Web Inventor and W3C Director Sir Tim Berners-Lee first shared his vision for the future of publishing on the Web at IDPF’s DigiCon event in May 2016, where the two organizations publicly announced plans to explore a combination to accelerate the alignment of technologies.

The IDPF membership approved the plan, by a large majority (88%), and the IDPF Board and W3C have finalized the transaction. The agreement also includes an unprecedented number of organizations -- including most IDPF members and several large publishers who are not IDPF members -- that have made Royalty-Free (RF) commitments to ensure that the future of EPUB and the Open Web Platform for publishing is not patent encumbered.

"W3C is thrilled to gain the expertise of the publishing industry with its rich tradition of excellence in developing many forms of content for books, magazines, journals, educational materials and scholarly publications," said Dr. Jeff Jaffe, W3C CEO. "Working together, Publishing@W3C will bring exciting new capabilities and features to the future of publishing, authoring and reading using Web technologies."

Jaffe added that by participating in W3C activities, publishing organizations will learn about new innovations from other industries, such as music and entertainment, whose technologies, like publishing, pre-dated the Web. In the future, book authors will be able to seamlessly incorporate Web capabilities such as linking to dynamic documents, search, and multimedia.

George Kerscher, Chief Innovations Officer for the Daisy Consortium and president of IDPF since 2010 commented, "By combining our organizations, we not only align our technology roadmaps, but also accelerate the adoption of content that is natively accessible and device-friendly for all types of publishing, whether you are reading on the Web or offline."

The Publishing@W3C roadmap includes plans to charter new standards work this spring that will focus on both online as well as offline access for digital publications. This means that someone reading on a device that is not connected to the Web may still interact and retain the information when he or she is back online, and vice versa.

To ensure EPUB's maintenance and advance EPUB's further adoption, W3C is setting up a separate EPUB (3.1) Community Group that is free and open to anyone to participate.

W3C is also planning to explore meeting the next generation of EPUB requirements in a proposed Publications Working Group. The next EPUB Summit will take place 9-10 March in Brussels, Belgium.

W3C has named Bill McCoy to oversee a smooth transition of former IDPF members and other interested organizations from the publishing ecosystem into W3C. McCoy was formerly Executive Director of IDPF. The former IDPF Board of Directors will transition to new roles on the W3C Publishing Steering Committee, providing strategic direction and liaising with the publishing community and the various Publishing@W3C groups. For more information about participation in Publishing@W3C activities contact Alan Bird, Global Business Development Leader at [11]abird@w3.org.

About the World Wide Web Consortium

The mission of the World Wide Web Consortium (W3C) is to lead the Web to its full potential by creating technical standards and guidelines to ensure that the Web remains open, accessible, and interoperable for everyone around the globe. W3C standards HTML5 and CSS are the foundational technologies upon which all Web sites are built. For its work to make online videos more accessible with captions and subtitles, W3C received a 2016 Emmy Award.

W3C's vision for "One Web" brings together thousands of dedicated technologists representing more than 400 member organizations and dozens of industry sectors. Organizationally, W3C is jointly run by the MIT Computer Science and Artificial Intelligence Laboratory (MIT CSAIL) in the United States, the European Research Consortium for Informatics and Mathematics (ERCIM) headquartered in France, Keio University in Japan and Beihang University in China. For more information see https://www.w3.org/

EPUB is a registered trademark of W3C.