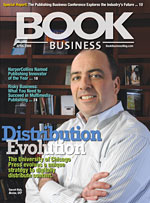 Green was the fashionable color on Monday evening, March 10, as more than 200 publishing industry executives gathered for a unique celebration in the Marquis Ballroom of the Marriott Marquis in New York’s Times Square, during the Publishing Business Conference & Expo. It wasn’t an early St. Patty’s Day celebration either, but a celebration honoring the recipients of the 2nd Annual SustainPrint Leadership Awards, recognizing achievements and leadership in “green” publishing. The awards—established in 2007 by SustainPrint.com (the Web site produced by book business and publishing executive magazines to cover environmental sustainability in printing and publishing)—recognize book- and magazine-publishing companies each year for outstanding

The University of Chicago Press (UCP) has never had to regard itself as an afterthought. Founded in 1891 as one of the three original divisions of the university, the press has, from the beginning, been squarely in the center of the school’s mission to educate, advocate and innovate—a charge that continues to this day. In addition, it’s of more than passing interest to the press’s leadership that it is entirely self-supporting, even funding a few research grants at the school. “I’m unabashedly proud of the fact that our books are aimed at a shrinking audience and that we make money off them,” says Garrett

Ten years ago, digital, ondemand book printing officially burst upon the scene at Book-Expo America. With IBM’s roll-fed and Xerox’s sheet-fed equipment producing books on the show fl oor in Chicago, Ingram (then Lightning Print) and Bertelsmann (through OPM) invited the industry to get on board while the train was at the station. Since then, Lighting Print has transformed into Lightning Source, a subsidiary of Ingram Industries and the nation’s largest 24/7 book-at-a-time printer. Book and journal manufacturer Edwards Brothers, which had also been operating a one-off DocuTech service for some years before 1998, has expanded its reach and now has seven satellite digital

Grabbing the Bull of Change by the Horns

I have just returned from the Publishing Business Conference & Expo in New York (full coverage begins on page 10) and couldn’t help but feel that this year, more than ever, there was a sense of camaraderie, a message of “We can do this. Look at all the opportunity out there.” In an interview for this issue, Jane Friedman, president and CEO of HarperCollins Publishers Worldwide (see the story on HarperCollins on page 18), said, “I think that, in the past, publishers have been afraid of change. … What we’re all seeing now is that experimentation is necessary, and … everybody is facing the

“To resist change, at this point, is true foolishness,” says HarperCollins Publishers Worldwide President and CEO Jane Friedman. Under Friedman’s direction over the last 11 years, HarperCollins has gone beyond not “resisting” change; the company has, in fact, been a pioneer of change, several paces ahead of the industry in many of its endeavors regarding digital content creation and distribution, marketing and audience-building. This year, the company—one of the largest English-language publishers in the world—has been named as book business’ Publishing Innovator of the Year in recognition of the company’s leadership and innovation. The first-annual award was presented to HarperCollins at an awards reception

Adult trade publishers with a “change is good” attitude are finding success in today’s market. From promoting literacy to experimenting with new marketing initiatives, such as social networking sites and author videos, and new distribution formats, such as e-books and digital downloads, industry leaders are now acting upon, not resisting, the significant turn the publishing world has been taking. Data indicates that while monthly sales fluctuate, overall, sales are still up, and many publishers are proactively striving to keep them that way. Last month, The Association of American Publishers (AAP) reported that adult hardbound book sales totaled $2.8 billion in 2007, a 7.8-percent increase

Preparing for the Industry’s Future

History was made at the Publishing Business Conference & Expo on Monday, March 10, as the Green Press Initiative (GPI) and the Book Industry Study Group (BISG) presented findings from the first-ever environmental survey of the U.S. book industry. GPI, a nonprofit environmental advocacy organization, and BISG, an industry trade association, commissioned the study to help the industry understand its environmental impacts, assess areas for improvement and make recommendations for improving its ecological footprint. Michael Healy, BISG executive director, and Tyson Miller, GPI director, unveiled the 73-page “Environmental Trends and Climate Impacts: Findings from the U.S. Book Industry” to a crowded conference room of

Book publishing is not commonly identified with the sort of risk-taking that one would associate with, say, the Sergey Brins and Steve Jobses of the world. And, the last company one might expect to see out on a proverbial limb would be a publisher of dictionaries (a tradition-bound format if there ever was one)—yet it was no less a player than the stalwart Merriam- Webster that over a decade ago risked it all, so to speak, by putting its dictionary online for free. “One of the reasons we [offered early on] our biggest best-seller on the Web is that, if we take seriously that

With the U.S. economy on shaky ground, book publishers, like so many others, are honing in on ways to cut costs while growing their businesses. This often means tapping the resources of thirdparty partners to manage the aspects of the publishing business that fall outside the publisher’s core competencies (creating and marketing great content)—things like physically managing inventory and fulfilling orders from retail partners and consumers. For fulfillment help, publishers may turn to their book printers, which often have warehousing and fulfillment operations to complement their manufacturing services, or to a third-party fulfillment specialist. Location, Location, Location Direct-mailers will tell you that minimizing mail