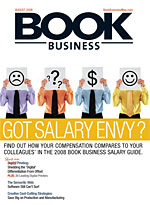 With the rising costs of fuel and raw materials, it has become essential for most publishers to find ways to save money in book production and manufacturing—a task that can be quite challenging without sacrificing too much in terms of quality. However, with changing circumstances have come new strategies, some of which are riffs on past ideas, while others would have seemed unthinkable just a few years ago. “Right now, it’s hard to realize really big savings on manufacturing costs because paper keeps going up,” notes Marie Butler-Knight, longtime publisher of Penguin’s “Complete Idiot’s Guide” series. “At the same time,

Tim Berners-Lee, director of the World Wide Web Consortium (W3C), outlined a strategy for the future of the Web in a series of papers and articles published between 1998 and 2001. He observed that while there was a wealth of information available for people to explore on the Web, computers had difficulty extracting information from it. The Web consists largely of free-form text, and computers have great difficulty understanding human language. While search engines can index the Web, a human being is required to interpret the search results. You may be able to surf the Web, but your computer can’t. The value of the

PublicAffairs, an imprint of The Perseus Books Group, recently found itself with an enviable problem—not enough books to fill orders for a runaway best-seller. The book was Scott McClellan’s White House memoir “What Happened: Inside the Bush White House and Washington’s Culture of Deception,” but luckily for Perseus, the appearance of McClellan’s face everywhere on TV this spring coincided with a propitious meeting at BookExpo America between John Ingram of Ingram Book Group, owner of digital printer Lightning Source, and Perseus Publisher Peter Osnos. “Demand went vertical, and there was a period of time when orders were coming in and they [didn’t have] any

It has been another year of increasing challenges and opportunities for book publishing executives as manufacturing and distribution costs escalate, and the media landscape shifts and shimmies before our very eyes. As costs continue their steep incline and new opportunities on the digital horizon demand more and more attention, many of you have been increasingly tasked with wearing additional hats—whether you’re the president, the head of operations or manufacturing, the production director, marketing director, or just about any other position. While publishing has never been a cakewalk (for most, anyway), it seems that now is a time when you certainly need to earn your

The Web is an ever-changing animal. Keeping that in mind, the most successful online marketing executives must think in the future tense: coming up with inventive, original ideas to help publishers stay ahead of the game. Jeff Yamaguchi, associate director of online marketing for Random House Inc. division The Doubleday Publishing Group, is one such innovator, and he fills us in on a little secret—that the future tense is not enough. In June, Yamaguchi launched Doubleday’s newly revamped Web site, which uses a WordPress platform to simulate the look and usability of a blog while maintaining Doubleday’s integrity and standards as a

The Book Market: Not an Industry in Decline

Despite the rising costs and tight supply of paper, increasing fuel costs impacting shipping prices, and growing pressure to cut inventory and increase turnaround times, among other challenges facing book publishers, two Book Business articles reveal positive news for the book manufacturing industry. In the June issue, the “Top 30 Book Manufacturers” feature showed that revenue for 23 of the 30 book manufacturers listed had grown over the previous year. According to Book Business’ 2007 ranking (in the June 2007 issue), just 17 book manufacturers had reported revenue increases. In this issue, in Book Business’ first compilation of leading digital book printers

The Corner Office: Publishing Outside the Box

Many would consider Harlequin Enterprises Publisher and CEO Donna Hayes an innovator. Not only is she the first woman to head the Canadian-based company, a position she has held for the past five years, but under Hayes’ leadership, Harlequin has consistently made industry headlines for its willingness to experiment in all areas of the book-publishing business—from joining forces with Nascar in 2006 for a series of stock car-themed novels to signing an exclusive deal to partner with Audible.com for digital audiobook distribution of its titles. Harlequin also was the first major publisher to offer its entire front list in e-book format, and has further