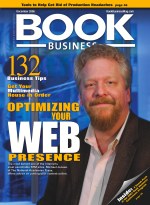 34 Tips, Tactics and Considerations for Using Webcasts to Expand Your Brand

The International Digital Publishing Forum (IDPF), the standards and trade association for digital publishing, joined forces with the Association of American Publishers (AAP) this week to help educate book publishers on the background of the new industry-wide technical standards for digital content delivery. The IDPF’s new digital standard for packaging a digital publication, including the contents of the publication, metadata, signatures, encryption, rights and other information, into one standard file were formally introduced Wednesday to publishing leaders by the association during a meeting at the AAP’s New York offices. The registration was limited to 50 attendees for the event. According to the IDPF, its Open eBook

Get “34 Tips, Tactics and Considerations for Using Webcasts to Expand Your Brand” -- it’s one of the featured articles on www.BookBusinessMag.com, from the latest issue of Book Business magazine. And, don’t forget to check out Book Business’ webinar on the same topic (also accessible for free at www.BookBusinessMag.com, which provides an in-depth look at two publishers’ success stories using webcasts to expand their brands and their bottom line. Look for the print edition of Book Business in your mailboxes any day now -- it’s our annual “Tips Issue,” and features 132 business tips on a variety of topics, from inventory

Signs of movement toward electronic distribution in publishing continued this week as an announcement was made Wednesday that Houghton Mifflin Co. will be purchased by HM Rivergroup, a newly formed Irish private equity firm led by investor Barry O’Callaghan, for $3.4 billion, including $1.75 billion in cash. The Boston-based Houghton Mifflin, the United State’s fourth largest textbook publisher, is expected to merge with Riverdeep, a Dublin-based software maker known for its educational material. The two companies will be called Houghton Mifflin Riverdeep Group once the deal is complete, HM Rivergroup representatives said. “We are excited about the future of HM Rivergroup and the ability to [capitalize]

A “who’s who” of the book industry convened in the Big Apple last month to mingle as the annual National Book Awards were bestowed on this year’s batch of winning authors. The black-tie affair, the award’s 57th ceremony, took place at New York’s Marriott Marquis on Nov. 15. This year, the judges chose from 1,259 books submitted by publishers for what has become a leading literary prize for Americans since it was first given in 1950. Richard Powers’ “The Echo Maker,” published by Farrar, Straus and Giroux, earned the top award for fiction this year, while Timothy Egan took home the nonfiction award for “The Worst

Don’t be afraid of electronic distribution—make your content available online, because it’s the best way to appear on radar screens these days. For smaller marketing departments, it’s the best way to market your books. So says the National Academies Press’ (NAP) Michael Jensen. “You have to give material to search engines to munch,” he says. “Content is its own best advertising. That’s only going to increase in significance. Most people feel like once the PDF gets out there, suddenly the market will dry up, [but] it’s demonstratively not true. I don’t know of an instance where somebody made the material available for free

Google suffered another setback in its efforts to defend its digital book library when rival Yahoo declined to provide information to assist with an upcoming copyright infringement lawsuit revolving around its digital-book scanning program. Yahoo responded to a Google subpoena and objected to providing information for two upcoming court battles Google will face against the Author’s Guild and McGraw-Hill Companies. The plaintiffs accuse Google of digitizing material without prior consent from the copyright holder. Google had hoped to gain information about how its competitors had undertaken similar projects. Yahoo said in its Nov. 20 filling to the United States District Court in the Northern District of