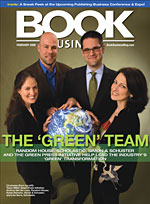 Jon Scieszka is on a mission—a mission to get more kids reading. In January, Scieszka, a veteran author of several best-selling children’s titles, including “The Stinky Cheese Man” and “The True Story of the Three Little Pigs,” was named the first National Ambassador for Young People’s Literature by Librarian of Congress James H. Billington. Committed to a two-year term in his new role, Scieszka will travel the country and speak as an advocate of youth readership. The Library of Congress’ Center for the Book, the Children’s Book Council (CBC) and the CBC Foundation created the new Ambassador position. The initiative is financially supported by

The Book Industry Study Group Inc. (BISG) has announced the publication of “The Identification of Digital Book Content,” a new document exploring how digital publications should be identified. The publication was commissioned by the BISG and the Book Industry Communication (BIC), a London-based industry organization, and written by industry consultant Michael Holdsworth. According to the BISG, the publication is intended to stimulate debate throughout the book industry on how digital book content should be identified, and to encourage the development and implementation of identification standards for such content as more books are made available in digital form. “The idea for a discussion

Book Business magazine is presenting a free, live webinar on “Developing a Digital Distribution Strategy,” presented by Andrew Brenneman, manager, digital media group, University of Chicago Press, Books Division, on Tuesday, Feb. 12, at 2 p.m. (11 a.m. PST). The webinar will provide you with a useful, strategic framework for navigating the exciting and rapidly changing waters of digital distribution. Even if you can’t make it on Feb. 12, you can view the archived webinar for 90 days after the live event. Register now at www.BookBusinessMag.com/docs/webinars.bsp

At the Sundance Film Festival last month, Sharp Independent at HarperCollins—the partnership formed in October 2007 between the independent film production company and the book publisher—announced several book titles optioned for film adaptation. Sharp Independent at HarperCollins was created to develop and produce motion pictures based on HarperCollins’ titles. It works with authors and their representatives to acquire the film rights for books from future, current and existing backlist adult titles. The titles that were announced for film adaptation are: “The Queen of Babble Series,” by Meg Cabot; “Live From Cape Canaveral” by Jay Barbree; “The Space Between Us,” by Thrity Umrigar; “The

According to one of the better-known accounts in the compendium of humankind’s greatest achievements, it was in the year 105 that a Chinese man named Ts’ai Lun invented paper, mashing up wood from a mulberry tree with fiber from bamboo. Thus was born a technology that would literally change the world, making possible artistic, scientific and religious revolutions, democratizing literacy and learning, and ushering humanity into the modern age. In recent times, paper production has played a role in changing the world in other ways. The book industry alone required 3 million to 4 million tons of paper over just the last three years,

Thomas Nelson Inc. announced a new environmental plan and paper policy yesterday. Developed in consultation with the nonprofit organization Green Press Initiative (GPI), the initiative outlines measures to reduce the Christian publisher’s environmental impact, including reducing paper consumption, increasing the use of recycled paper, supporting best practices in forest management, and creating awareness and educational programs for employees, customers and suppliers. “As the world’s largest Christian publisher, it is our responsibility to protect the resources God has bestowed upon us,” says Michael S. Hyatt, president and CEO of Thomas Nelson. “Our vision is to dramatically reduce our carbon footprint over the next five years,