GÜTERSLOH, Germany—November 13, 2015—The international media, services and education company Bertelsmann has achieved a record operating profit after nine months of 2015, with its revenues on the rise. As of September 30, 2015, Group revenues were up by 2.8 percent compared to the same period last year, to €12.2 billion (previous year: €11.8 billion). This is the first time since 2007 that revenues for the first nine months of the year exceeded €12 billion. Operating EBITDA improved markedly by 7.4 percent to a record €1.6 billion (previous year: €1.5 billion), reflecting a stronger growth in revenues and profits than during the first half of the present fiscal year. The EBITDA margin was 13.1 percent (previous year: 12.6 percent).

Group profit surged, nearly doubling to €573 million (previous year: EUR 292 million), and thus reaching the prior-year total Group full-year profit (€573 million) after just nine months. Besides the strong operating performance, this significant increase was partly driven by a decrease in negative one-off effects. Last year, among other factors, an impairment loss on RTL Group’s TV business in Hungary in connection with a special tax on advertising had a significant impact.

Bertelsmann Chairman & CEO Thomas Rabe said: “2015 has been a very gratifying year for Bertelsmann, to date. We stepped up our growth momentum in the third quarter, and in the first nine months achieved an operating profit that clearly exceeds our previous record. This good business performance is accompanied by progress in implementing our strategy to make Bertelsmann a faster-growing, more digital, and more international company. Our latest investments in the growth platform of education are a good example of this.” 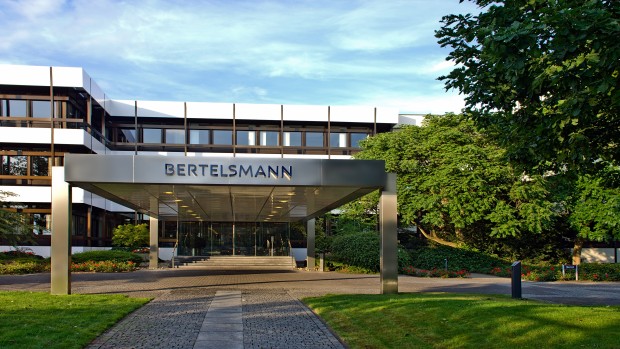 Since establishing the Bertelsmann Education Group in September, Bertelsmann has expanded its education business. Among other initiatives, it has acquired a stake in the university services provider HotChalk; increased its shareholding in Udacity, an online education provider for the technology sector; and expanded Relias Learning, an online education provider in the healthcare sector, through its acquisition of RediLearning. Bertelsmann will gradually build up education into the third mainstay of its business, alongside media and services.

Rabe also pointed to the creative successes the company has scored in 2015. RTL Group has earned international recognition among audiences and critics alike with the UFA fiction series “Deutschland 83,” and following its success in the U.S. has already sold more than 20 licenses to the eight-part espionage series; RTL Television will begin airing it on November 26. Penguin Random House published “The Girl on the Train” by Paula Hawkins, the biggest-selling adult fiction debut novel of the past ten years, in English- and German-language editions, selling more than 6.5 million copies to date. Gruner + Jahr successfully launched a number of new magazine titles, many of them in Germany, including “Stern Crime”, “National Geographic Traveller,” and most recently, “Barbara,” with an initial print run of 430,000 copies. And BMG landed its first number one on the U.S. Billboard Top 200 with Janet Jackson's new album “Unbreakable,” released in partnership with Jackson's own label Rhythm Nation.

Bertelsmann also has made further progress since the beginning of the year in implementing its overall strategy. Examples include the reorganization of Arvato; the formation of the Bertelsmann Printing Group; the expansion of RTL Group’s online video offering, which generated a total of 71 billion views in the first nine months; Arvato Financial Solutions’ market entry in Brazil; the acquisition of various music companies by BMG; and the expansion of the portfolio of digital companies especially in China, India, and the U.S. Bertelsmann now has holdings in approximately 135 innovative companies in the digital sector worldwide via various funds.

Thomas Rabe concludes: “The positive business trend of the first nine months and a good start to the fourth quarter have us optimistic for the full year results. We continue to expect higher revenues and higher operating EBITDA than last year.”

The prior-year figures were adjusted.

About Bertelsmann
Bertelsmann is a media, services and education company that operates in about 50 countries around the world. It includes the broadcaster RTL Group, the trade book publisher Penguin Random House, the magazine publisher Gruner + Jahr, the service providers Arvato and Be Printers, the music company BMG and the Bertelsmann Education Group. The company has more than 112,000 employees and generated revenues of €16.7 billion in financial year 2014. Bertelsmann stands for creativity and entrepreneurship. This combination promotes the creation of first-class media content and innovative service solutions that inspire customers around the world.