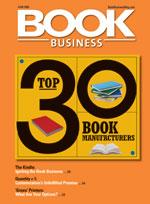 Who hasn’t tried the excuse, “My dog ate my homework,” on a teacher? Success with that excuse now is nearly impossible, according to experts in educational book publishing. So much of what teachers currently do involves digital materials and tools that, short of a network failure or computer glitch, a student would be hard-pressed to come up with a similar excuse.

I am galvanized. Not only have I always wanted to say that, but it’s true. I am in awe of what is happening in this industry. Attending Making Information Pay (MIP) a couple of weeks ago fueled this feeling. A few things, in particular, struck a chord.

10.5 million Number of sheets of paper that were used last year in Princeton University campus clusters—equivalent to 100,000 reams of paper, or about 5,000 trees. Princeton cited this figure on its Web site when explaining why it is participating in the Kindle DX E-reader Pilot Program this fall. The university hopes that students’ use of the Kindle DX will reduce their desire to print or photocopy without hindering their ability to learn.

How to Adapt to the Shifting Market

Digital content enables distribution on a massive scale. A few examples: (1) the ability to inexpensively and instantaneously spam the known universe; (2) the ability to distribute video content to audiences that a small cable network would find attractive; and (3) most importantly, the ability for Ashton Kutcher to keep a million of us abreast of his every move in real time (via Twitter).

The Kindle—Igniting the Book Business

Book businesspeople are about to make the same mistake that has devastated the music and newspaper industries: worrying about whether a new digital format will cannibalize their traditional business rather than focusing on how to make the new format more competitive with other digital media.

In the current economy, the book manufacturing industry appears to be caught square between the proverbial rock and a hard place: on the one side, a publishing business suffering from decreased consumer demand and on the other, suppliers destabilized by the credit crunch. The industry, however, is showing surprising resiliency, having been thrust into difficult times with eyes wide open. Printers are determined to meet the challenge of a new marketplace defined by multiplatform delivery systems, environmental awareness and niche distribution models in the hopes that the post-“great recession” economy will find a book manufacturing industry emerging leaner, “greener” and more focused on the place of books in a digital age.

Your Options in 'Green' Printers

Regarding the book manufacturing industry’s commitment to “green” principles, it could be said that a page has truly turned. Over the past decade, consideration of climate impacts and paper sourcing has become central to the industry’s approach, and, along the way, many manufacturers have discovered ways to balance the need to economize, invest in infrastructure and reduce environmental impacts—often through innovative policies and practices that manage to do all three.