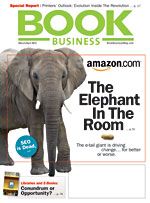 For a while there were two accepted methods of producing, conferting and delivering content across multiple devices—"XML First" and "Print First."

However, over the past year, a number of cross-platform publishing success stories have emerged that indicate a third practical approach. It is, in some ways, a cross between the first two. This third approach, which might be named "Manuscript First," involves the creation of a manuscript that conforms to specific conventions or standards as defined by the publisher. This is most often implemented in Microsoft Word by the use of standard Word style names to create a "well-formed" manuscript.

Amazon: The Elephant in the Room

In 1455 Johannes Gutenberg produced his famous "Bible"—the first book printed with moveable type—launching what would become in subsequent centuries the modern publishing industry. In 1995, Jeff Bezos sold the first book through Amazon.com, launching what would produce in less than 20 years the end of the modern publishing industry.

Hyperbole? Perhaps not, when the earth-shaking influence of the e‑commerce giant's recent moves in publishing are taken into account.

Gorillas, Elephants and the Dark Arts

Indian service providers for typesetting, e-book, copy-editing and other production services are an established fact and part of virtually every major publisher's workflow.

To be sure, the business process outsourcing (BPO) of publishing services is a growth business, forecast to reach $1.2 billion in 2012 (according to a report by research and intelligence organization ValueNotes, "Offshoring in the Publishing Vertical: 2009"), including outsourcing for book, magazine and newspaper publishing—with 60 percent of these revenues being directed to Indian providers.

That said, it appears that we may be on the verge of a new addition to the existing Indian business model—an initiative that the Indian book manufacturing community has named Book City—Vision 2017.

Recently, the leadership of the American Library Association (ALA) met with senior management from several large publishing houses. Some of them allow libraries to purchase and own their e‑books (Random House; Perseus). Some of them are not making their e‑books available to libraries (Macmillan; Simon and Schuster). And some are somewhere in the middle (Penguin, until recently; and Harper–Collins with its "26 circulations" loan cap model). In all of our meetings with the publishing executives (all of the aforementioned except HarperCollins), we found that for those not making their e‑books available through libraries, the sticking point was identifying a business model that protected their digital editions from piracy and loss of sales. These are understandable concerns.

Not Your Father's (or Mother's) Book Manufacturers

To survive and thrive as the book industry's digital revolution pushes forward, and as better inventory management drives the shift toward smaller print runs, the smarter printers are doing everything they can to ensure they'll be a part of that ongoing transformation. This includes incorporating newer technologies with an ever sharper focus on customer support and service. Book Business spoke with executives from Quad/Graphics, BookMasters, Sheridan Books, Walsworth and Thomson-Shore, and asked about their outlooks for their businesses. The general consensus: They're ready for what the next year (and the years to come) have in store for them.

To all you publishers who are struggling and stressing about catching up on the latest techniques for search engine optimization (SEO) in the hopes that your books will become more easily discovered by searchers:

Since the earliest days of search (remember AltaVista?!), search engines have been locked in a battle with Web developers for control over their search engine results pages.

The Burgeoning Business of Books

While the glitter and flash of ebooks, e-readers and tablets get all the mainstream media attention—and pundits predict the end of printed books—traditional printed volumes still represent enormous opportunity for print providers. According to Caslon & Company, monochrome books will account for up to 85 billion pages through 2016 and color books are expected to make up some 15 billion pages in the same period. Little wonder that savvy print providers are adding capabilities, technology and workflows to carve out a presence in this burgeoning market.