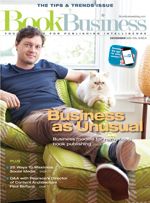 I am now pleased to share with you my own Publishing Business Conference highlight reel, which holds a multitude of innovative and practicable ideas on publishing.

The Book Industry Study Group has released its Best Practices for Product Metadata which explains what metadata is, how to use it and how it applies to your ebooks.

Book Business Announces the 2013 Publishing Innovator of the Year

Book Business congratulates the winners of the 2013 Publishing Innovator of the Year Award, which recognizes the most innovative publishers of the past year.

We spoke with publishing experts whose social media strategies have yielded loyal followings. They share 25 ways to make your social efforts more effective in 2014.

Technological disruption in the publishing industry has opened the doors to innovation. Here, four startups share their insights on reinventing book publishing.

Over the past few years, direct-to-consumer (D2C) sales have been top-of-mind for many in the publishing industry.  This approach has also been hotly debated, with some advocating for deeper consumer relationships through data, and others equating D2C with taking on Amazon in the retail space—a fight in which few, if any, would like to engage.

Future Think: What Will Shape Publishing in 2014?

We asked some of our favorite thinkers in the publishing world: "What trends will shape the industry in 2014?" Here's what they had to say.

According to a recent study from John Wiley & Sons, Inc., the number of open access (OA) authors—those who release their articles in journals that provide free access—is growing.

Paul Belfanti of Pearson, is helping to lead the charge to bring greater adoption of open standards to the education publishing industry.

Our 2014 Prediction: The Future Looks Bright

If only we had an oracle to tell us which books would most appeal to readers. If only we had a crystal ball to guide us in which new technology to invest.

The overarching question all publishers must ask, the existential über-question trumping all others, is: Where will revenue and earnings come from in the future?

Surprising Numbers from Simba Information's The iPad and Its Owner 2014

According to Simba Information's The iPad and Its Owner 2014, only half of iPad owners read ebooks on their devices. Tablet users are not necessarily ebook readers.