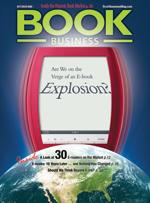 15 Ways to Save Time and Money in Book Production

Smart book production and manufacturing departments routinely evaluate their workflows and look for new and creative ways to streamline their processes, with a keen eye toward trimming both time and costs. Today, as the book publishing industry finds itself struggling in the same challenging economic environment as the rest of the United States, working efficiently is even more critical to preserving the bottom line.

Are We on the Verge of an E-book Explosion?

"The market for digital books … has been roughly doubling every 18 months,” says Andrew Savikas, O’Reilly Media’s vice president of digital initiatives. “Follow that line out, and in less than a decade it’s 64 times the size it is now.”

E-books and Our Future

In this issue, we’ve packed content galore on many of the most significant changes facing the industry. In addition to the features on the evolving retail landscape and ways to cut time and cost from production and manufacturing, there are three important articles on e-books.

In a classic, 19th-century short story, Washington Irving’s character Rip Van Winkle wakes up after being asleep for 20 years to find that the world has changed all around him. People he loved, including his wife, are no longer alive, and the country itself has—in the intervening two decades—gone through the massive trauma and upheaval of the Civil War. For Rip Van Winkle, it seems like only a few peaceful hours have passed; all he did was close his eyes. But in what seemed to him a short amount of time, everything around him had irrevocably changed.

E-Reader Evolution—Should We Think Beyond Ink?

Common in the history of technology products is the pattern that devices with multiple functions generally take market share from earlier, single-purpose devices. A classic example can be found in word processing: Dedicated word processors, such as those from Wang and IBM, gave way to PCs that could be used for a wide range of applications, among them word processing. Dedicated, wired, e-mail-only devices likewise gave way to the general-purpose PC.

400 Number of U.S. bookstores a Grant Thorton LLP retail study predicted will close this year, a 500-percent increase over 2008.

Inside the Hispanic Book Market

While the Hispanic population in the United States is expected to expand to nearly 50 million by 2010, according to the U.S. Census Bureau, current purchasing patterns indicate that this 16 percent of the nation may not buy books at the same rate as the remaining 84 percent.

Today's Retail Scene: Are You Prepared to Compete?

It used to be straightforward. A publisher sent out a catalog of new releases, promoting certain titles to bookstores. Marketing proceeded through fixed channels and seasonal rituals, and, year after year, everyone knew their place in the dance. Not so anymore.