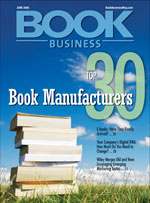 I recently attended the Book Industry Study Group’s Making Information Pay event (more coverage on pages 7 and 32), where Michael Cader, founder of Publishers Marketplace and Publishers Lunch, offered publishers simple, yet pertinent advice on engaging their audiences: “Leverage the damn book.” One example he gave: His son read a book from the “Alex Rider” series, so Cader went to the store to buy the series’ next book. To illustrate the point he was going to make, he projected a slide featuring the cover of every book in the series. There was nothing that told consumers which book to read next. The

Business Strategy: How to Evaluate New Software Systems for Your Organization

Missed Part I of This Series? You can find Part I of this two-part series here. Taking the time to step back and evaluate your company’s publishing software can be challenging enough in the midst of the daily grind, but once you become aware that real problems exist, the bigger challenge can be figuring out how to successfully address them. Part I of this article explored “the decision phase”—or, how to recognize the need for a new system and the triggers that alert you to that situation. In this second installment, you will learn ways to analyze, select and determine the success factors

Distribution in the Digital Age

Observed from 30,000 feet, the modern system for delivering manufactured goods appears little changed from what it was 30, 40, 50 years ago—trucks roll, trains rumble, ships ply the harbors and canals. Only a closer view reveals the logistical revolution made possible by rolling stock, just-in-time ordering and outsourced production. Similarly, the average consumer picking up the latest best-seller at their local bookstore is unaware of how book distribution models are changing. While the book they hold in their hands may adhere to the old “print-and-deliver” model, for instance, the one next to it may have been “deliver and print,” as in large distributors

“Today the book business stands at the edge of a vast transformation, one that promises much opportunity for innovation: much trial, much error, much improvement.” —Jason Epstein (“Book Business: Publishing Past, Present and Future,” Norton 2001) That was seven years ago, and today, innovation and experimentation—trial and error—is the theme of the Book Industry Study Group (BISG) report “From Experimentation to Innovation in the Digital Age.” The report contains the results of a survey on the industry’s attitudes and actions pertaining to experimentation (more on page 7). It also contains case studies—based on interviews conducted by Mike Shatzkin, founder/CEO of The Idea Logical Co.,

With the evolution of the e-book still clearly in its formative years, developments over the past year could perhaps be remembered as a real growth spurt thanks in part to Amazon’s launch of the Kindle. Reviews on the digital device were mixed, but it quickly sold out within hours of its debut on Amazon.com. Goldman Sachs has estimated that Amazon has sold as many as 50,000 of the devices in the first quarter of 2008. And Amazon has made more than 120,000 titles available for download on the device since its launch. It’s too early to tell, however, whether the Kindle has directly spurred

I started working with digital content 25 years ago, developing interactive products for publishers and other content organizations in New York City. I worked in small media and technology development firms, without much to speak of in terms of infrastructure. I imagined that the larger publishing organizations for which we developed products all had robust systems for the management of digital content. Ten years later, a large textbook publisher hired me to lead a media and technology group and I learned otherwise. There was no systematic approach to the management of digital assets. Following the printing of a textbook, digital assets were stored on

The Corner Office: Searching for Results?

Travel planning has never been easier. If you want to pack your bags and go somewhere—be it thousands of miles or only a few hours away—a simple Google search will bring you information from hundreds to thousands of sources. So how do travel publishers stay ahead of the Google game—and at the top of its results pages? Lauren Palmer, executive director of online strategy and business development for Fodor’s Travel—the largest worldwide publisher of English-language travel books and guides—is responsible for overseeing the company’s online property Fodors.com, including advertising and affiliate relationships, and digital licensing. And she knows a thing or two about

Speak to just about any book manufacturer these days about his or her business, and you’re likely to hear a laundry list of concerns: an economy teetering on the edge of a recession, paper’s rising costs and tighter supply, the need to respond to publishers’ and environmental groups’ “green” demands, and mounting pressure to improve turn times and to upgrade technology, among others. And yet, for an industry so seemingly wrought with challenges, a look at Book Business’ annual list of North America’s Top 30 Book Manufacturers (on pages 16-17) appears to tell a different story. Just seven of the 30 printers who appear

Having recently celebrated its 200th year, John Wiley & Sons Inc. is among the oldest independent publishers in the world. You don’t survive two centuries without an ability to change with the times. That, says Christine Dunn—the focus of this month’s Marketing Interview—is a core strength of Wiley’s. “Wiley hasn’t been around 200 years by not trying new things every now and then,” says Dunn, director of marketing for Wiley’s professional and trade division, home to such popular brands as “For Dummies,” “Frommers,” “CliffsNotes” and “Betty Crocker.” “… When you have the luxury of [working for] an organization that runs smoothly doing things it