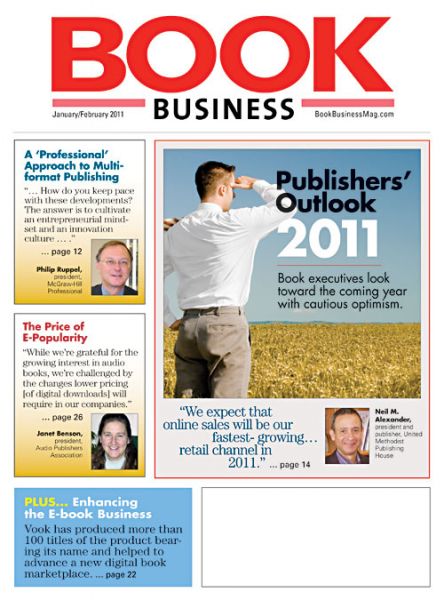 Philip Ruppel and McGraw-Hill Professional (MHP)—the publishing company for which Ruppel serves as president—arrived early to the digital party.

A look at what publishers are launching in the mobile space.

Sixty-four percent of publishers offer titles in e-book format, according to a survey of more than 600 publishers across the trade, professional and educational markets.

In late 2007, HarperCollins claimed to have published the first-ever e-book to include video. That e-book title, "Lady Amelia's Secret Lover," featured six embedded videos of the book's author.

4,200 Number of units of the book "Harry Potter and the Deathly Hallows" that were sold the week of Nov. 21, 2010 following the release of Part I of the movie of that title on Nov. 19, 2010. Each "Harry Potter" film release has encouraged a sales boost for books in the series, although that…

With a P.T. Barnum-like flourish, Google launched its eBookstore as "the largest e-books collection in the world!" Over 3 million titles! Step right up! Best-sellers and public-domain titles! Google made good on its commitment of launching the eBookstore before the end of 2010, and 2011 will be an interesting year for the e-book world. The…

Book publishers seem to be focused more on opportunities than challenges—or perhaps it's a case of seeing ways to turn the latter into the former.

The New Age of  Book Printing

The book printing market is now a hodgepodge of terminology for digital and offset printing, short-, medium- and long-runs, print-on-demand and long-tail applications.

These days, audio books are accepted as part of the mainstream. You see them mentioned in best-seller lists, book ads, editorial cartoons—even "The Simpsons."

The Year of Optimism

As I write this, I am not only in the midst of Book Business production, but the holiday season as well—parties, decorating and card writing, and lots of gift shopping. In the course of my shopping, I've managed to buy a few books as presents for, well, myself. (I've been good, Santa, I promise.) I…

Thinking ‘Outside the Book’

Diversification. In simple terms, the concept can be summarized by a well-known saying: Don't put all your eggs in one basket.