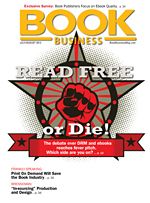 In many cases, outsourced service providers connect directly with one another to create an externalized production flow. For example, an external compositor may send the final PDF files used for print to an ebook conversion service provider. The publishing staff therefore assumes the role of an orchestrator of vendors, never actually directly performing the tasks involved in creating digital products. And therein lies the danger. If publishing organizations remain outside the direct creative process, they have a limited ability to impact product innovation.

A Brief History of the Short Run

Digital printing has saved the book industry. The old business model that printed an excess of books has been replaced for many titles by a more efficient on-demand model. Consider my personal example: Back in 1972, I wanted to self-publish a book. I only wanted 500 copies, but the printer said the minimum run was 5,000. I still have 4,000 copies in the warehouse, because someone may want a book on 1970s phototypesetting some day.

By now, it’s no surprise that tablets and mobile devices are revolutionizing the way we consume and interact with media. Although print is not expected to disappear anytime soon (63 percent of book publishers see no end­ in sight for producing printed books as part of their mix), book publishers are ramping up production of e­books with a focus on improving the overall user experience to accommodate the transitioning consumer. While more than half of the book publishers we surveyed decide how to produce a book on a per-publication basis, 30 percent are consistently producing both an e­book and printed book for each new publication.

A Partner in Green

The program gives publishers a way to gauge (and tout) their environmental responsibility. But what if you don't know where to start?

A Q&A with Larry Bennett of Bookmasters

Book Business: What are some of the key challenges you are facing today as you try to grow your distribution business?
Larry Bennett: The printed book business is shrinking (numbers from a variety of sources indicate that ebooks represent approximately 20 percent of the trade market). As it shrinks, there is growing pressure on publishers, authors, wholesalers, distributors, sales reps and retailers to maintain margins. In order to do this, we need to continuously improve in many areas, including operational efficiencies to minimize cost, effectiveness in the sell-in of our better titles, aggressive pursuit of non-traditional markets and expanded services.

It's hard to imagine any title launching today without a Facebook page, Twitter campaign, author blogs, online assets and video, and all other manner of digital marketing. But it wasn't so long ago—2008—that one of the year's biggest releases launched without any of that.

Dear. Mr. Brenneman: I must strongly disagree. For me and MILLIONS of my fellow Baby Boomers, the ability to increase the point size of text on an e-reader (Kindle, in my case) makes the reading experience vastly more comfortable and enjoyable. I don’t know how old you are, but you’ll understand someday.

I just read about a new book printed in disappearing ink. Published by Argentinean publisher Eterna Cadencia, “El libro que no puede esperar,” or “The Book That Can’t Wait,” features a selection of new Latin American authors, and is printed in ink that fades when exposed to light and air. Two months after you buy the book, it’s gone.

Trying to decipher paper pricing trends is like scrutinizing snowflakes—the closer you get, the more complex they seem. Still, there are a few key factors when considering the current economics of the paper business, which has been subject to unprecedented forces during and in the wake of the recent recession.

John Scalzi won't have to field any tough questions about how digital rights management software (DRM) works at tonight's book signing. The author—out on tour promoting his newest science fiction novel, "Redshirts: A Novel with Three Codas"—says those difficult discussions popped up regularly when he engaged with his tech-savvy fan base in the past. But he doesn't expect any of that negative discourse at tonight's Boston-area signing event—or at any of the other scheduled stops on his current campaign to promote the New York Times bestseller.

According to a new study from the Pew Internet and American Life Foundation, most Americans do not know their local libraries offer e­books.

Content marketing is the hot new term in the world of marketing. As it is when anything new and potentially revolutionary comes along, confusion and fear about this new 12-headed beast are running rampant. I've heard some bewildering arguments against content marketing that were based on little more than fear and "yeah, well, my second cousin the web geek told me xyz" reactionary belligerence.

University of Arizona Study analyzes the wide world of self-publishing

“Self-publishing not only is changing the traditional publishing industry and the relationship between authors and editors, but also the ways readers are connecting with books.”

So say the results of a multi-year study lead by a research team at the University of Arizona’s School of Information Resources and Library Science (SIRLS).

What Publishers are Launching in the Mobile Space

Based on the series “The Chronicles of Vladimir Tod” by New York Times best-selling YA author Heather Brewer, High School Bites allows users to enter into the blood-sucking world of Vladimir Tod, Brewer’s hero whose human mother and vampire father perished in a fire. Special features of High School Bites include two different ways to play—either swiping the screen or tilting the device—and three different levels of difficulty, which users can increase as they progress.