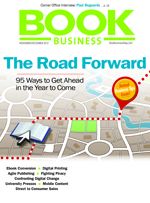 Now that Amazon has announced that it's selling more books in digital form than in print, it's only logical that even the smallest of independent publishing houses are racing to make their entire backlist available as ebooks. Book Business solicited a wide range of advice about the ebook conversion process from digital publishing pros. Here's what they had to say:

Piracy—the illegal downloading and/or distribution of copyrighted works, not swashbuckling on the high seas—is a sticky wicket indeed. With the advent of the Internet and other digital technologies, online piracy has grown into a significant concern for all types of copyright owners, including publishers. There can be no doubt that content piracy costs publishers and other rights holders large amounts of revenue. But exactly how much revenue is being lost is a point of contention. It can be challenging to determine how much publishers should focus on the piracy of their publications and articles and whether, if they go too far trying to protect themselves, they run the risk of alienating some of their best customers.

When publishing teams wax enthusiastic about their vision for digital media and technology, director

AppWatch: A look at what publishers are launching in the mobile space

Oceanhouse Media's "Record and Share" functionality, Oxford University Press' "How Good Is Your English?" and Zondervan's "The Beginner's Bible."

Book Pricing: Rein in the Aggression

What is a book worth? That question took on new meaning in 2012. The form of the book itself came under scrutiny after the U.S. Department of Justice filed a lawsuit in April against Apple and five major publishers. Using phrases such as "revolutionary change," "dramatic explosion in sales," "a variety of benefits" and "considerably cheaper to produce," the government drew a clear distinction between ebooks and their print counterparts.

Here's your strategy landmine for the day: The web browser is dying off. It may be difficult to fathom, but in a few years, no program we use on our tablets, phones or computers will resemble the web browsers we're using today. Digital services, social platforms and most importantly, digital content are all steadily migrating away from the web browser and into the world of apps.

This feature is best viewed in Book Business' digital edition. To do so, please click here.

When we bumped into some McSweeney's operatives at Book Expo America earlier this year, the San Francisco publishers tipped us off that Dave Eggers' next project, "A Hologram for the King," would be a jaw-dropper, a marvel of production quality and finishing elements. The book, which came out earlier this year, did not disappoint: It's a veritable masterwork of design flourishes, a book ascended to art. To get the skinny on the finer points of the book's finer points, we rang Kevin Spall, President and CEO of Thomson-Shore, the Dexter, MI printer that manufactured it. Spall, who happened to be meeting with Eggers later that day to collaborate on his next project, gladly told us what's what.

Are publishers confronting digital change, or is digital change confronting publishers? So wondered Chris Lederer, a director at AlixPartners and the moderator of "Organizations Confronting Digital Change," one in a series of educational webinars at September's free Publishing Business Virtual Conference & Expo, a production of Book Business and its sister publication Publishing Executive. Lederer, along with Ania Wieckowski, Managing Editor of Harvard Business Review Press, and Holly Gilly, VP, Product Development at Human Kinetics, provided deep knowledge and great takeaways for publishers who are grappling with digital change:

While no publisher can realistically abstain from the online retail behemoths when it comes to book selling, there is no reason why selling directly to consumers cannot be a viable option, especially if publishers work to build relationships with readers. In the tips below from five different publishers on how they have found success with direct selling, certain themes recur: building trust with readers, smart audience targeting and cultivating an overarching brand sensibility.

I'm writing this note on Election Day Eve, and while the world is eagerly reading Nate Silver's political predictions in his excellent New York Times blog FiveThirtyEight, I've been tucking into Silver's new book, "The Signal and the Noise: Why So Many Predictions Fail — but Some Don't" (Penguin Press).

Silver holds an exalted position as a high priest of political statistical analysis; his model for crunching polling data in 2008 proved eerily accurate. As publishing moves into an era of big data, there's much to be gleaned from Silver's cool approach to information. Silver's stance is that, contrary to conventional wisdom, more information is not necessarily a good thing, and certainly not right away.

On the Record With: Paul Bogaards

Paul Bogaards is Executive Vice President, Executive Director of Publicity and Media Relations for the Knopf Doubleday Publishing Group, where he has worked since 1989. In January Bogaards posted a much-talked-about tumblr post entitled “Hierarchy of Book Publishing: The Top 100 (circa 2010).” He spoke with Book Business about the challenges and rewards of working in a changing industry.

Paper is Part of the Process

If you've been following the printing world—and if you're reading this column we've got a hunch that you have—you know that advances in digital printing have transformed the technology from the world of the small-run to a viable print-on-demand option for publishers of all sizes and stripes. But don't be fooled: Digital and offset lithography remain quite different beasts.

As publishers become increasingly digital, both in workflow and product offering, we will continue to hear more and more about the agile publishing model. Agile is a methodology that comes from the software development industry. Its main components are iterative design, rapid prototyping, minimum viable product (MVP), customer feedback loops which provide behavioral and usage analytics and data-driven decision making.

Essentially, the objective of agile is to push things to market more quickly, and to learn from actual usage patterns. The data collected informs subsequent product releases. While this model has yet to be fully realized or articulated in the publishing space, there are components of it which have been the subject of experimentation among publishers. If your company is just starting in agile or is in the midst of implementing an agile workflow, here are a few tips to keep in mind: