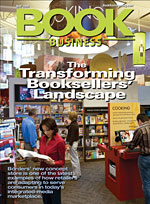 As the founder of Internet service provider Juno, Charles Ardai knows a thing or two about making a big splash on the Web. When Ardai sold his company in 2001, the entrepreneur and writer, then all of 32 years old, decided to pursue his dream of reviving the pulp-fiction genre by starting his own publishing company, Hard Case Crime. He knew from the beginning that success would require good online-selling tools. “It’s a pretty popular genre,” Ardai notes, “but it is a genre, and there is a certain fan base that loves this stuff. If you can find one of those fans, the

Printers generally like to talk about investments they’ve made in print technologies—offset or digital. Perhaps that’s because it suggests they’re doing well and that they’re investing in their customers’ businesses. Besides, talking about a slick, new machine that requires little to no makeready time and gets up to color with minimal effort is sexy. Well, comparatively speaking. The clunkier “back-office” equipment found in the typical finishing department is perhaps not as provocative, but talk to most any book printer or trade binder, and they’ll likely confide that the bindery machines are the real workhorses. Indeed, investing in the bindery is just as important

Business Strategy: How to Evaluate New Software Systems for Your Organization

Publishing companies of all sizes often spend significant time and money on software service contracts and IT training, assuming that their current systems—whatever they are—will continue to support not only back-office functionality, but editorial, marketing, sales, production, warehousing and e-commerce functionality as well. In the best of all worlds, they will. But at what cost? Many companies augment their formal systems and databases with home-grown databases, especially lists of various types held in multiple Excel worksheets belonging to multiple staff members. In most cases, these subterranean databases are unknown to other staffers, even though the databases may be posted to a company

The publishing industry’s intensified movement toward going “green” was highlighted by recent reports from three major trade groups—the Book Industry Study Group (BISG), the Association of American Publishers (AAP), and the Printing Industries of America/Graphic Arts Technical Foundation (PIA/GATF). In this column, I summarize the major features of each of these reports, as well as note a bit of contention on some of the findings, that point to the why and how of going “green” for publishers and book printers. (For an extensive and very useful backgrounder, check out the article “The Green Team,” by James Sturdivant, in Book Business, February 2008, also

Is There an ePod in Our Future?

Last month, I attended the London Book Fair and came home with new thoughts on the future of e-books. In particular, an in-booth presentation by DNL eBooks’ Peter Kent—author of many books including “SEO for Dummies” and “The Complete Idiot’s Guide to the Internet”—combined interesting statistics and Kent’s opinion on e-books’ future. Of course, Kent’s affiliation with DNL eBooks should be kept in mind, as the vendor provides a 3-D e-book technology (that incorporates Adobe Flash) through a software download for personal computers. (The technology was used in the Avon [a HarperCollins imprint] e-book release of “Lady Amelia’s Secret Lover,” which featured embedded video

Who is God? What is worth fighting or dying for? Can different religions coexist? These were just a few of the questions that French filmmakers Jules and Gédéon Naudet set out to answer in meeting with some of the world’s most revered spiritual leaders for their television documentary “In God’s Name,” which aired on CBS in December 2007. The Naudets garnered worldwide recognition in 2002 for their documentary “9/11”—recipient of that year’s Emmy for Best Documentary and a result of their own experiences in Lower Manhattan on Sept. 11, 2001. In the several years that followed Sept. 11., the Naudets began to question

The biggest news in book retailing so far this year may be Borders’ opening its first “concept store,” a new generation of superstores unveiled in February in the company’s hometown of Ann Arbor, Mich. At 28,900 square feet, the new store—the first of 14 planned to open this year—does not skimp on size, and a lot of that space is taken up by innovative features: shop-within-a-shop “destination zones” for travel, cooking, wellness, graphic novels and children’s categories; bold, new architectural designs; and a “digital center” offering services ranging from book downloading to self-publishing. “Our mission is to be a headquarters for knowledge

The Corner Office: He Did It