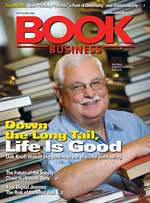 Like many parents of elementary-school-age children, I spend a fair amount of time around trains. Steam, cog or narrow-gauge, I am no stranger to the iron horse. Perhaps that explains the frequency of my use of railroad metaphors. This column is no exception. To realize the full potential of digital technology in product development and marketing, content organizations will continue to evolve over a long period of time. This journey can be represented as a railroad track with parallel rails. These rails are necessary to move forward and stay on course. But unfamiliarity with the track can have deadly consequences. The First Rail:

Down the Long Tail

Amid the arterial cacophony of northern Delaware, the city of New Castle is a quiet outpost of an earlier age. Cobblestone streets laid out during the 17th century offer fine dining, museums, river views and, every October for the last 15 years, Oak Knoll Fest, a celebration of the art of fine press bookmaking. Participants come from around the world to meet master printers, attend panel discussions and browse exhibits from artisans specializing in engraving, binding, papermaking and letterpress. The modern interstate jockey, stumbling upon the town and festival halfway to somewhere else on nearby I-95, might find him or herself disoriented, charmed and—let’s

A “slow, but steady decline” is how Rhonda Herman, executive vice president at reference publisher McFarland & Co. Inc., characterizes the market for reference books. “We are cautious about sales and will feel lucky if sales remain flat.” The reality of an economic downturn is starting to sink in—McFarland’s volume is flat, Herman says, “but actual income is down 2 percent. The reason for this is that we are experiencing higher than normal overstock returns, which is not surprising in this market.” Both direct and indirect costs are hitting the bottom line at the Jefferson, N.C.-based publisher. Higher fuel costs are forcing up the

53% Percentage that the number of RSS users increased between June 2007 and March 2008. Source: Universal McCann $3.4 million Amount of trade e-book sales for April 2008, a 19.9-percent increase over April 2007. Source: Association of American Publishers/International Digital Publishing Forum 82% Percentage of readers who prefer curling up with a printed book to new reading technology. Eleven percent of respondents said they are comfortable reading books in other formats, such as online or with an e-book reader or PDA. Source: 2008 Random House/Zogby Poll $37.26 billion Total book publishers’ net revenues in 2007, up 4.4 percent over 2006’s total. Unit sales

With its new Web site, HBG has established an infrastructure for digital development, says COO Beth Ford. With close to one year on the job, Hachette Book Group (HBG) Chief Operating Officer Beth Ford continues to work toward increasing efficiencies—and profits—for owner Hachette Livre, who purchased the publishing company from Time Warner in March 2006. Ford, who joined HBG last September after serving seven years as Scholastic’s senior vice president of global operations and information technology, dove right in by reviewing the publisher’s processes and identifying “gaps” that needed to be filled. It’s a full plate of responsibilities—one Ford relishes, she says.

The Future of the Supply Chain Is (Almost) Here

Imagine this scenario: A pallet of books arrives at a distributor’s warehouse. It is scanned, allowing the system to keep track of the location of every book as the shipment is robotically de-palletized, stored and machine-prepared for shipment to retailers. Arriving at the point of sale, cartons are scanned at the door and all contents entered instantly into inventory, with special-order customers notified automatically that their book has arrived. Customers and employees can then discover with the click of a mouse exactly where a book is located in the store, and inventory, even at the largest bookstores, takes no more than 20 minutes.

Your Staff, Not Technology, Will Set Your Company Apart

Most of us have worked with both good and bad staff throughout our careers. Some are bang-your-head-against-the-wall awful. I remember one associate editor I had who was invariably late with his articles. The really bad part was that he didn’t give a hoot that it would impact the magazine, the readers or even other staff members. One time when I asked him, “Do you have your article?” he simply said, “Nope.” When I reminded him that it was past the deadline, he raised his hands and shoulders in a shrug. (Needless to say, we mutually agreed that the job was not for him.) Another