The BIGNY session will be held at the Courtyard by Marriott Hotel, 231 West 54th Street, NYC. The speaking session will begin at 6:15 pm; a professional networking event will start at 5:15 pm.

Admission for the November 2018 BIGNY event and networking reception is $45 for BIGNY members; $75 for nonmembers; and $5 for the speaker portion of the program only, available only as an online purchase.

For more information and online ticket purchase, go to www.bigny.org. 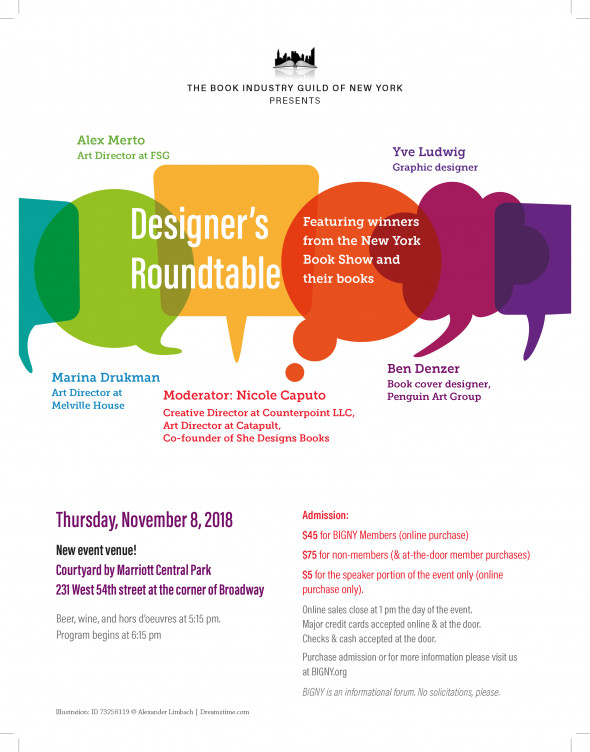 About the Book Show and the Featured 2018 Winners

Hosted by the Book Industry Guild of New York (BIGNY) and established in 1985, the New York Book Show is an annual event honoring quality book design and production from the previous year. A panel of industry professionals evaluate hundreds of entries sent in by publishers and suppliers from around the nation in six main and a myriad of subcategories. The 2018 Book Show was co-chaired by Christine Davis and Edson Atwood.

Nicole Caputo is creative director of Counterpoint Press; art director of Catapult; and co-founder of She Designs Books, an organization that celebrates women in book design. Awards include the One Show, AIGA, London International Creative Competition, and Publishing Professionals Network.
Ben Denzer is an artist, designer, and publisher focused on exploring the book as an object. He is a book cover designer at the Penguin Art Group; holds a residency position at New York's Center for Book Arts; designs and publishes the small-edition artist press, Catalog Press.

Marina Drukman is a Ukrainian-born graphic designer and art director at Melville House. She attended the School of Visual Arts in NYC, falling in love with book cover design at Picador before becoming senior designer at Life magazine, then art director at Elle Decor. Marina’s work has been recognized by The Art Directors Club, SPD, Graphis, AIGA, Print magazine, and others.

Yve Ludwig is a New York-based graphic designer with an independent practice focused on the publishing, educational, and cultural sectors. She holds an MFA from the Yale School of Art. Her work has been recognized by the American Institute of Graphic Arts, Association of University Presses, Print magazine, and more.

Alex Merto is art director at Farrar, Straus, and Giroux and partner of Graphiatrist, a design studio focused on editorial design and brand identity. He graduated from the School of Visual Arts. His work has been recognized by the AIGA, The Type Directors Club, Print magazine and The New York Times.

About the Book Industry Guild of New York (BIGNY)

BIGNY is a New York-based organization that serves the publishing industry and community. Since its inception in 1926, the Guild has provided professional development opportunities by hosting social and educational events, seminars, industry trips, and more. The Guild produces the annual New York Book Show, which celebrates outstanding achievements in book design and manufacturing.