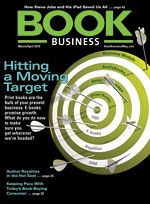 12 Costs to Consider in Outsourcing Distribution

In previous columns, I've explored the strategic reasons to consider outsourcing distribution operations and the request for proposal (RFP) process for outsourced distribution partners. Now, let's assume that you have evaluated all the third-party proposals and selected the finalist among the various bids.

For a company that celebrated its 50th anniversary last year, Minneapolis-based Lerner Publishing Group is not spending much time looking back at its history and tradition. Instead, it is focused on remaining lithe enough to adapt to the changing book market.

Author Royalties in the Hot Seat

With ostensibly lower production costs and a rich vein of backlist titles to mine, it may have been inevitable that e-book publishers would leverage the advantages of their medium to  offer authors a higher percentage roy-alty rate for their works. This did not make it any less of a jolt when celebrity  author Stephen Covey signed a digital rights deal with e-book publisher RosettaBooks, garnering him more than half of net proceeds for e-book sales of two of his older backlist books, including the famous "The 7 Habits of Highly Effective People," which would be sold exclusively through Amazon.com for one year. (Covey's print books are published by Simon & Schuster, which released a statement reflecting its position that e-book versions of the company's print titles should remain part of the company's catalog.)

Amazon.com Inc. announced at the end of 2009 that its Kindle  e-reader had become the most gifted item in Amazon's history. On its peak day of the holiday season (Dec. 14, 2009), Amazon customers ordered more than 9.5 million items worldwide—a record-breaking 110 items per second—according to an Amazon press release.

1 Year The contract term for which best-selling author Gavin de Becker's expanded and updated e-editions of two of his books, "The Gift of Fear" and "Just 2 Seconds," will be available exclusively in Amazon's Kindle Store (www.amazon.com/kindlestore). This is the first time "The Gift of Fear" has been available electronically, and both books will be exclusive to the Kindle Store for one year.

Publishers are faced with strategy decisions like never before. As publishing options continue to grow and business models shift seemingly every few months with the introduction of new digital devices or growth of some external pressure, publishers must plan for the future while reacting to the present—a tough situation even without the need to deal with the effects of a down economy.

The consumer market for U.S. book publishers has changed significantly in the past three years, driven largely by fundamental shifts in the way books are published, found and ultimately purchased by readers. These changes sometimes leave publishers with more questions than answers in determining what their next move ought to be to keep pace with today's consumer.

Looking for Jobs, Tips,  Vendors? We Got ’Em

Each year, we conduct an annual reader survey to find out what you think of Book Business magazine and whether it's providing valuable information to help you in your publishing career. In that survey, we ask what resources we can provide you with via our Web site, BookBusinessMag.com. I am always surprised to read responses such as "job listings" or "news updates" or "a directory of solutions and software serving the industry"—because these are things we already offer online.

The iPad launch was a classic bit of business theater. In what may prove to be one of the great product launches of his fabled career, Steve Jobs unleashed his unique alchemy of stealth, spectacle and awe to lay his pearls before the impatient masses. The public played its role fervently, at once being swept up into the rapture of the Apple hype machine and then recoiling at being manipulated so skillfully.

You Can Quote Me on That!

Editors’ Picks: Quotes that we love … or at least think are pretty cool (from the past year in Book Business). And, they actually paint a pretty accurate picture of the state of things.